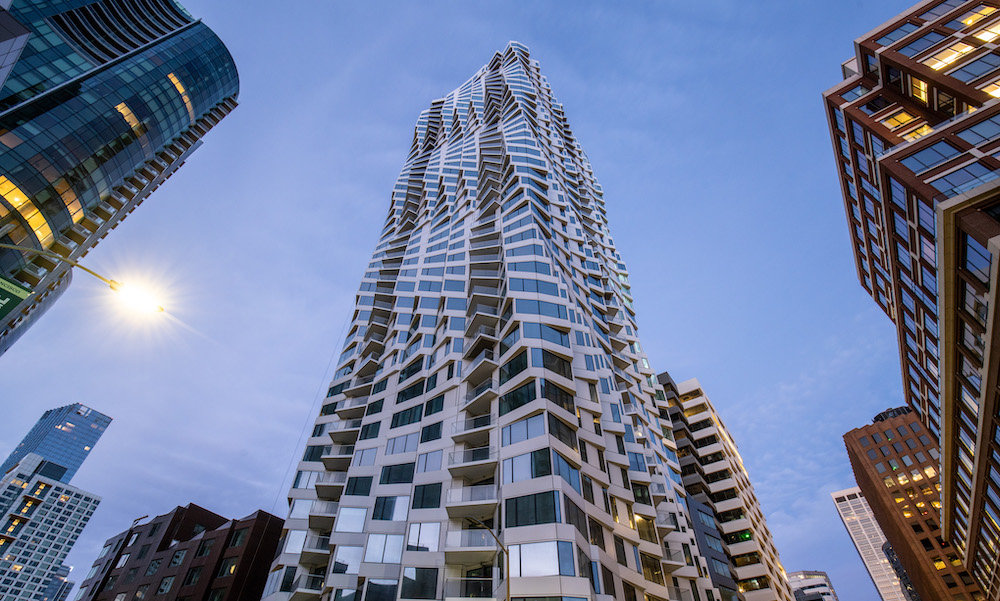 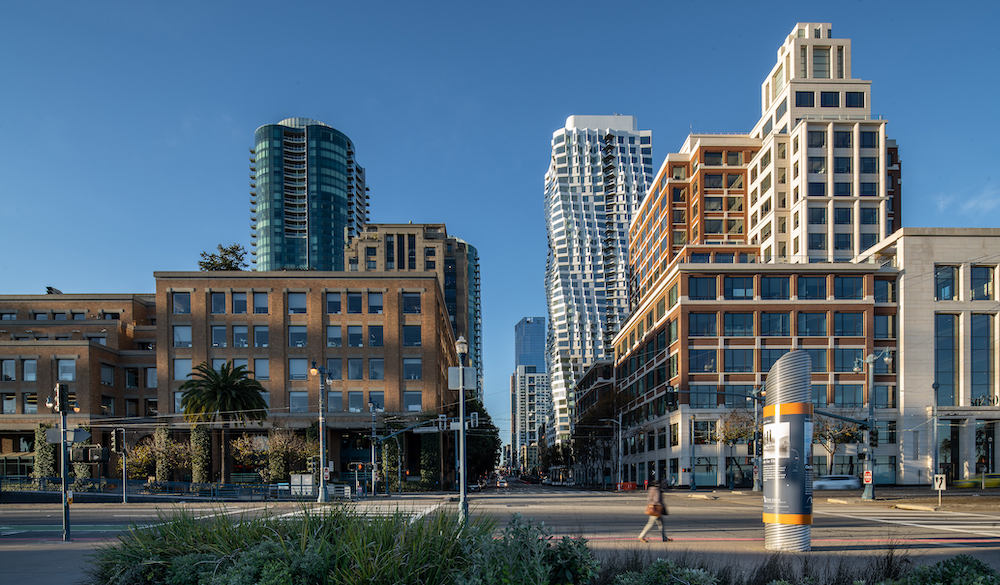 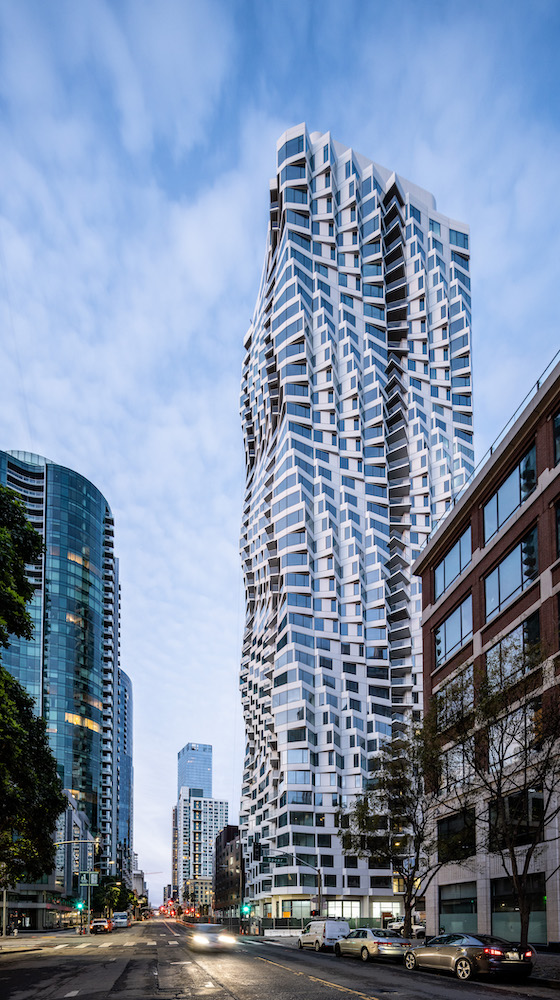 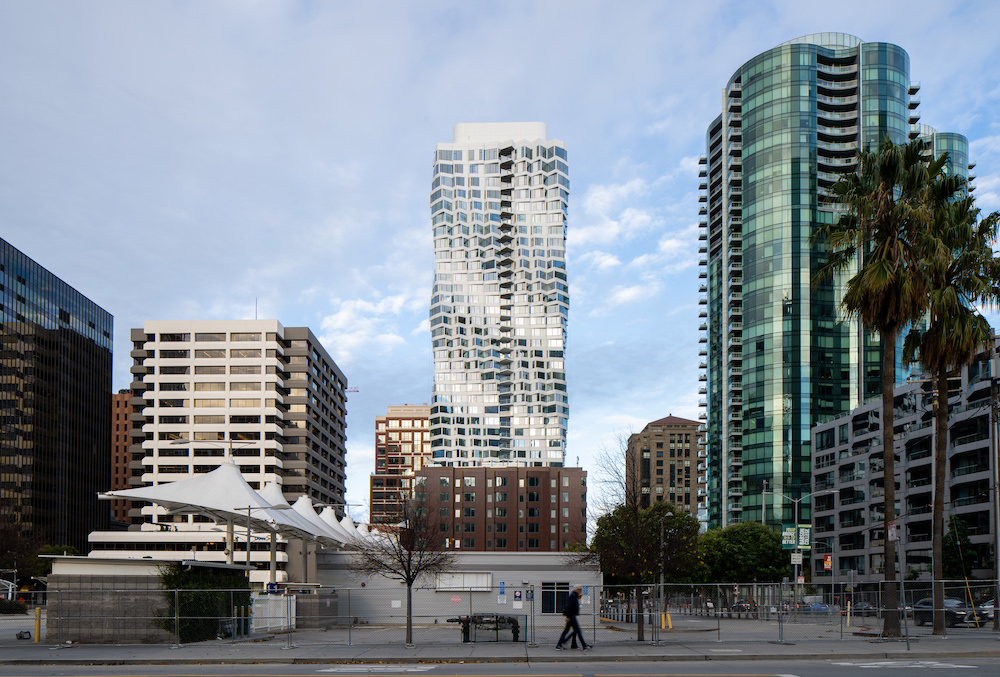 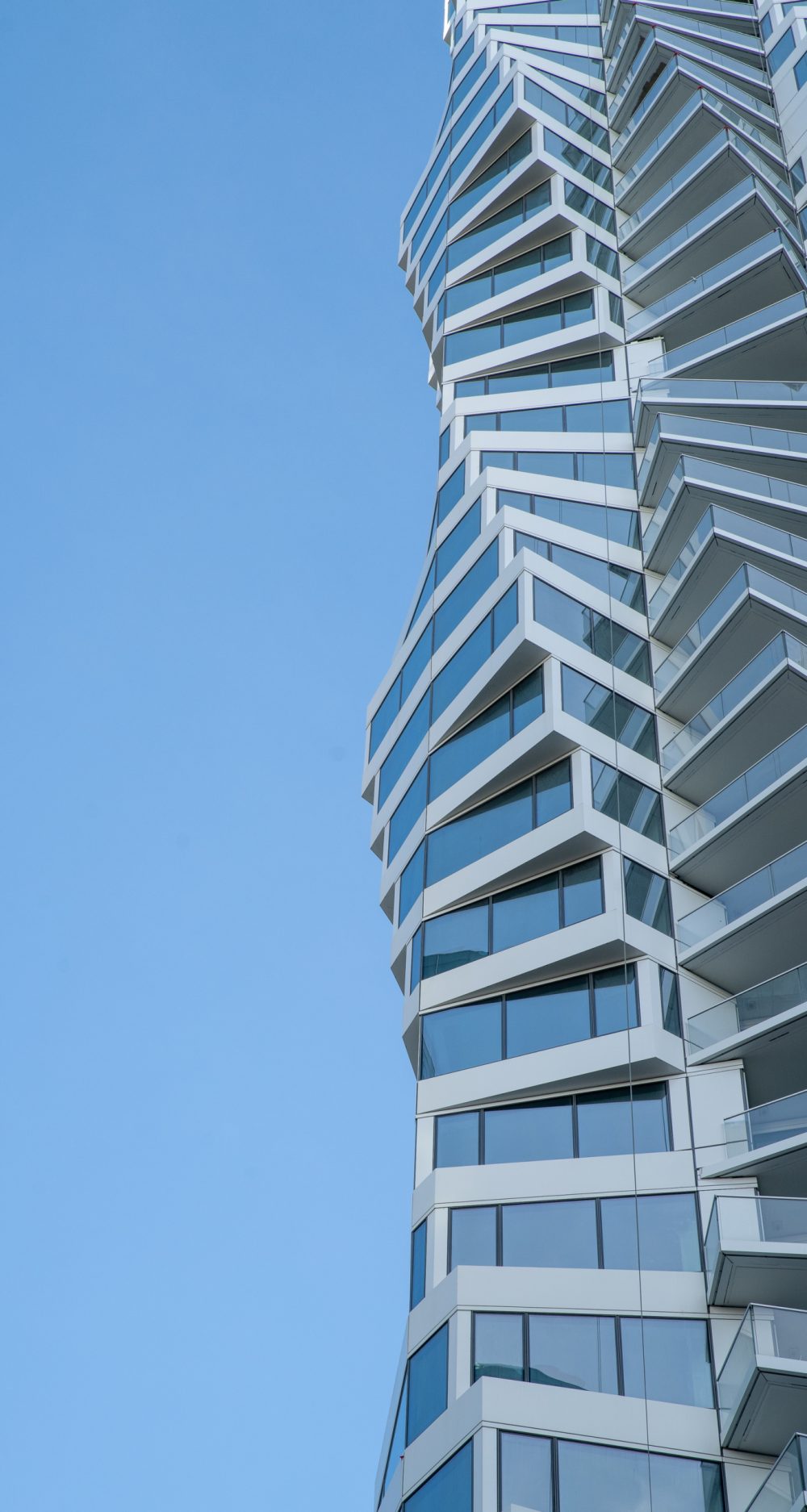 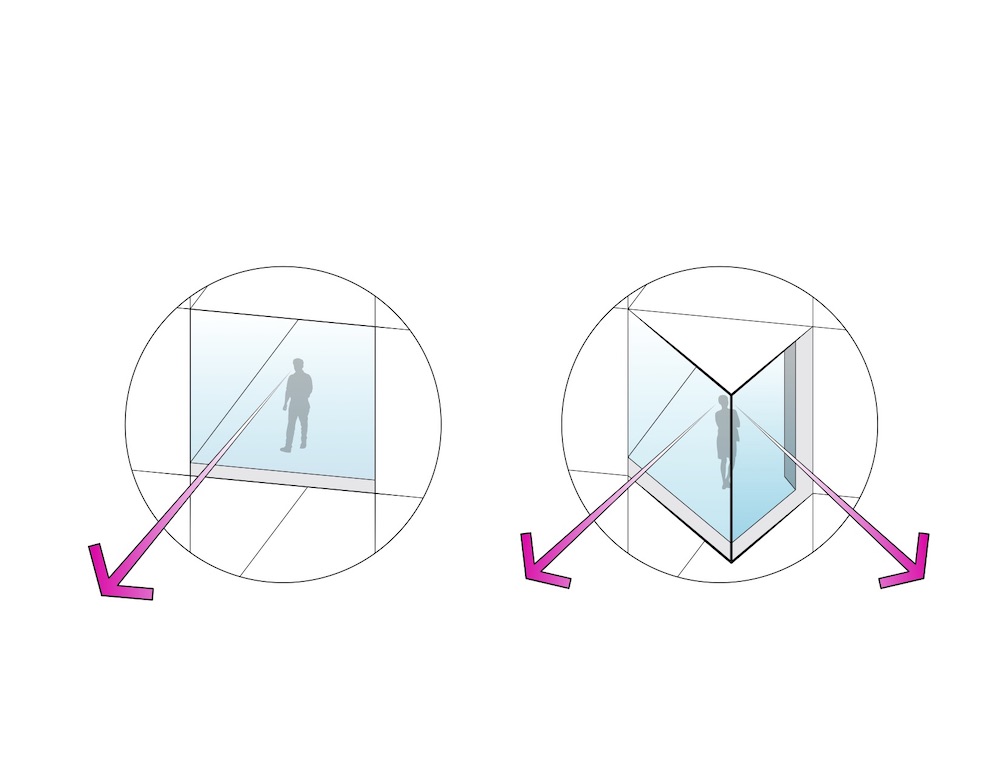 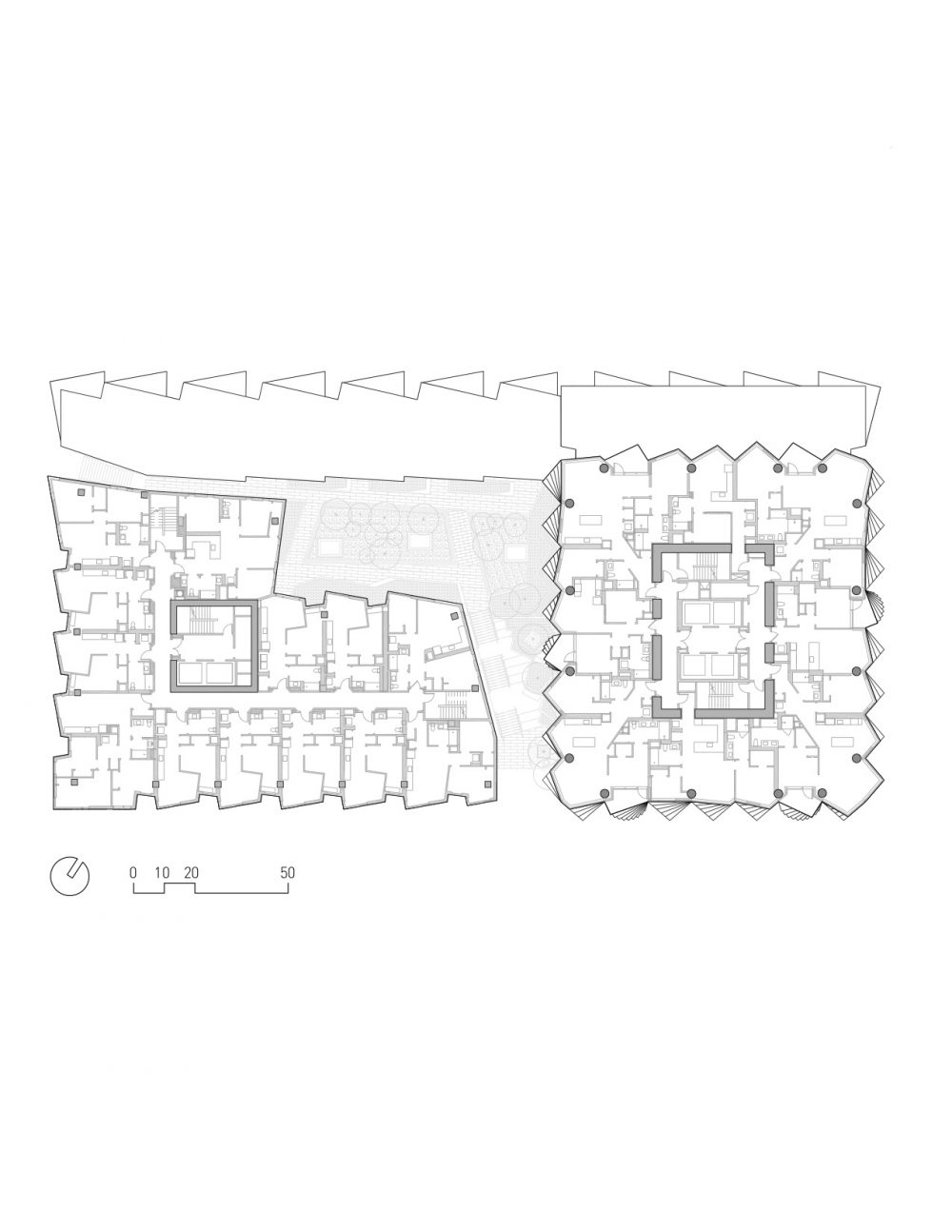 <
►
>
The use of bay windows affords each unit daylighting and views from multiple directions. (Courtesy Studio Gang Architects)

Located just south of San Francisco’s Financial District and blocks away from the bay, MIRA Tower is a housing development that grabs your attention with a highly detailed geometric form. The project joins a spate of recently completed and under construction towers in the Transbay Development Zone, including Pelli Clarke Pelli Architects’ Salesforce Tower and the Heller Manus Architects’ 181 Fremont. Designed by Studio Gang Architects in collaboration with facade consultant Heintges and fabricator Permasteelisa, the tower presents a spiraling aluminum-and-glass facade arranged in a panoply of bay windows and terraces.

Developed by Tishman Speyer, the size of the project is formidable and consists of both a tower and a terrace of townhouses—with a footprint of 50,000 square feet and spanning 700,000 gross square feet. To comply with FAR constraints and rules set out by the district zoning guidelines, the initial design reached a height of 300 feet. Following a request to the city government, the allowable height of the tower was raised to 400 feet with the inclusion of 156 below-market-rate apartments, or just under half the total number of units. 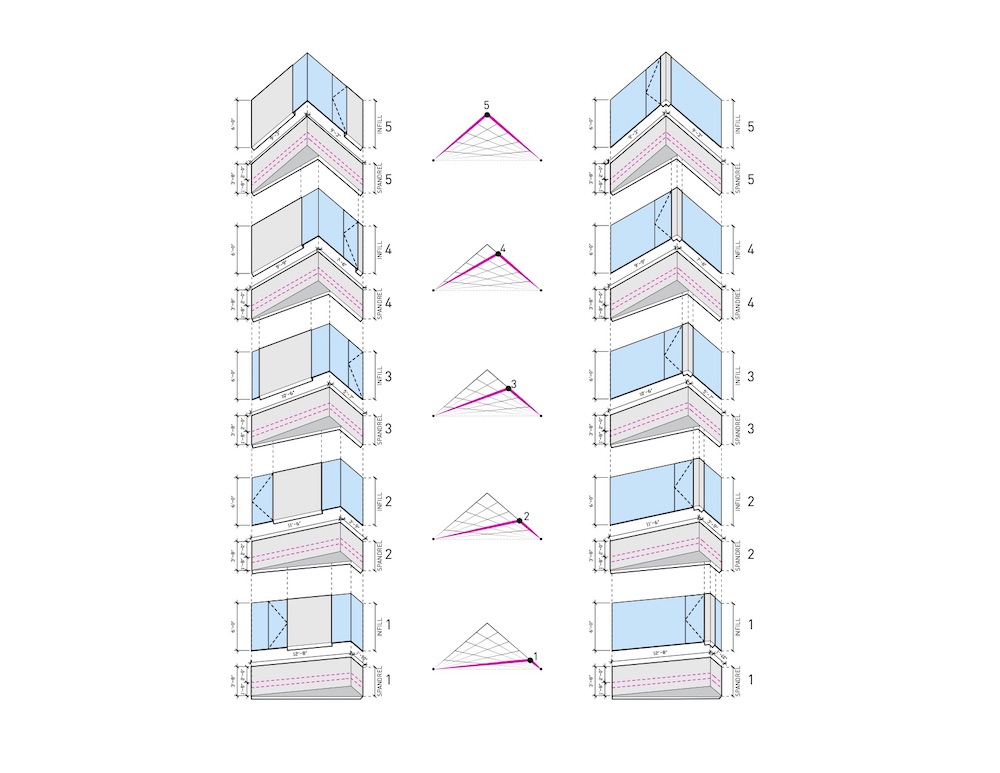 Studio Gang turned towards the architectural vernacular of the San Francisco-area for the overall form and massing of the tower and townhomes, reinterpreting classical bay windows into a contemporary gesture. There are ten different bay geometries: each is an isosceles triangle 14-feet wide and with differing spandrel and glazing dimensions, and with a maximum depth of six-and-a-half feet. Thirty bay window units are found at each level, adding up to, in total, over 1,000 across the tower. Shifting the bay geometries was not the initial direction of the project but a discovery during the design phase that, through offsetting and repeating a set of variations every 10 floors, a profound level of detail could be added to the project without causing undue complications in fabrication and construction. Through the inclusion of bay units across the facade, each residence is afforded daylight from multiple directions and sweeping views of the city at large.

Facade consultant Heintges joined the project during the early schematic design phase to both conceptualize the enclosure design and develop a facade system with sufficient waterproofing and compatibility with locational seismic requirements. “In this system, the windows act like a freestanding window wall, loaded at the sill and allowing movement at the header,” said the Studio Gang design team. “The spandrel panels, on the other hand, are rigid enough to take the wind loads and transfer the window loads down to the slab.” The resiliency of the tower is further strengthened by a heavy central core that allows for exterior pieces to move independently of another during seismic events.

For the longterm maintenance of the facade (specifically window washing at great heights) Studio Gang and Heintges incorporated a number of intermittent stabilization anchors across the bay units. In collaboration with building maintenance consultant CS Caulkins and cleaning device fabricator Sky Rider, the design team developed a custom platform capable of being lifted between the bays by integrated attachment points.

The project broke ground in late 2017 and topped out in mid-2019; Permasteelisa handled the fabrication and installation of the facade panels and typically fitted out each floor in four days, completing the job at the tail end of 2019. The bays were fastened directly to the slab edge from within the building, a measure that, along with the division of spandrel and infill, reduced the use of a crane on-site and in turn lessened energy consumption and neighborhood disruptions stemming from site logistics.

“Three-dimensional aluminum spandrels cover the slab edge and are anchored to the post-tensioned slab with steel embeds that extend vertically,” continued the Studio Gang design team. “Behind the aluminum panels are stiffeners that resist wind loads, reduce deflections, and control flatness. In order to realize the steps between bay geometry variations, there is always a horizontal portion of the panel which either faces up as a sill condition or down as a soffit condition.”