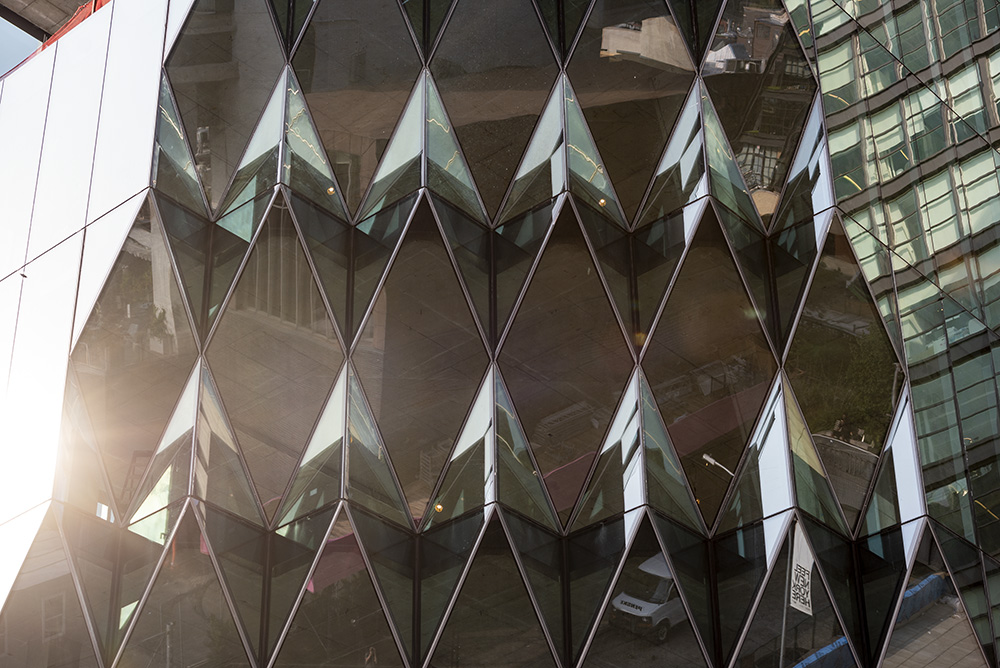 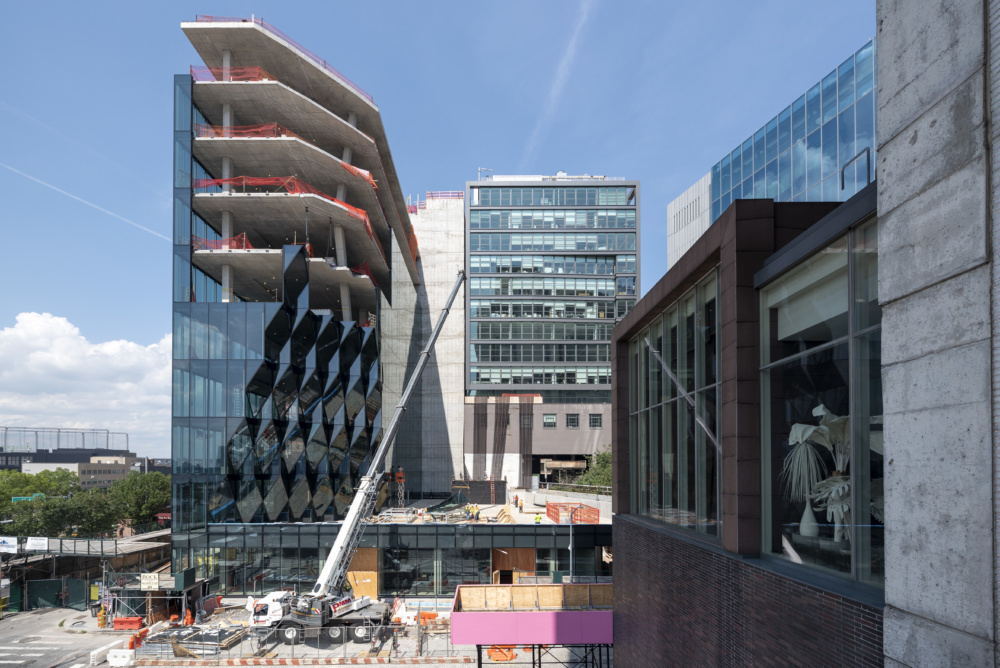 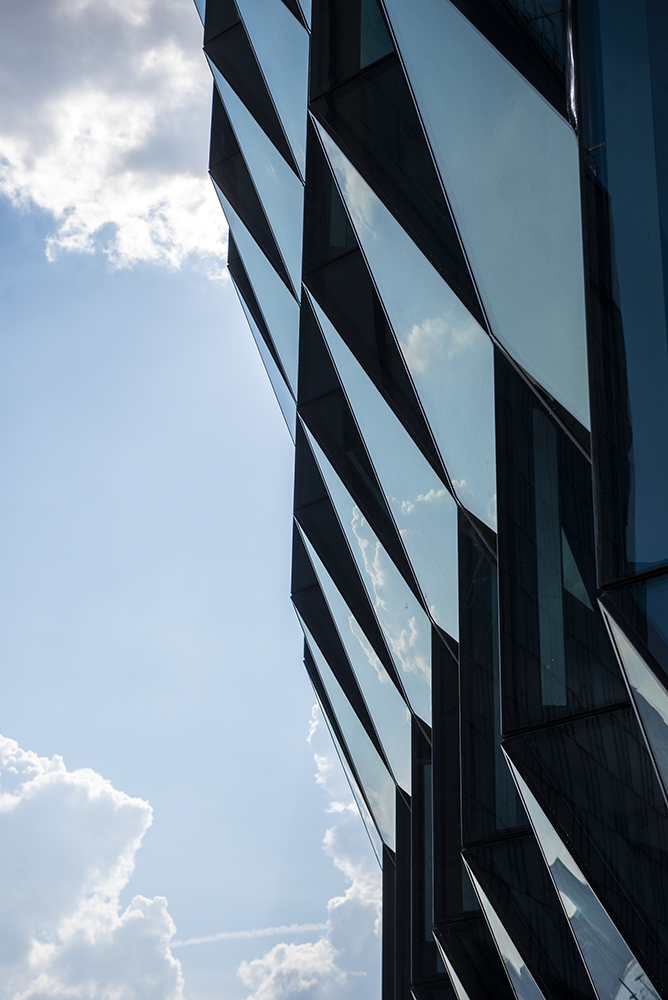 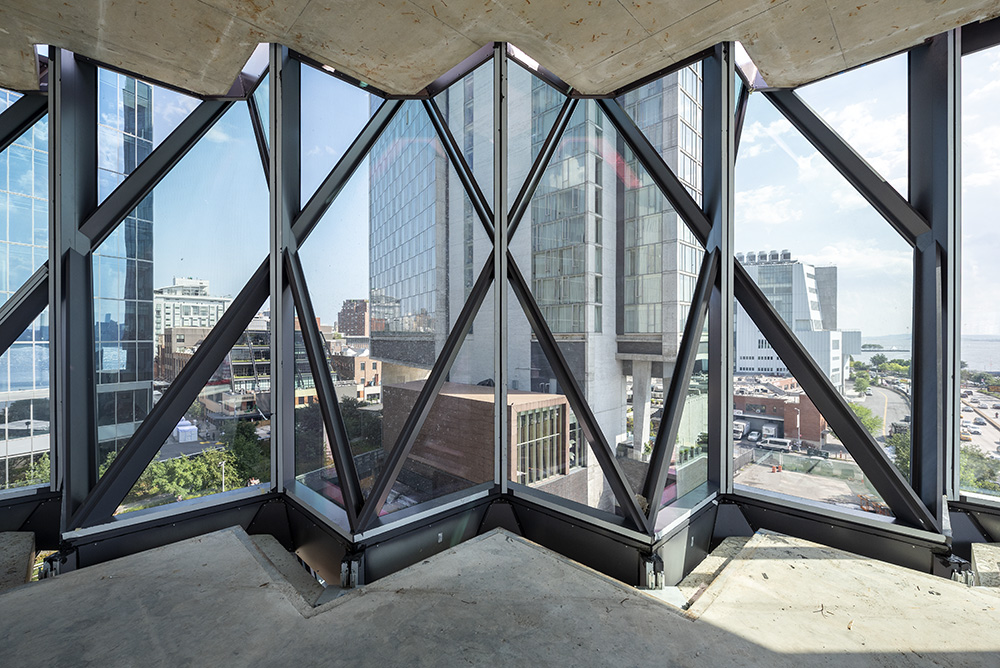 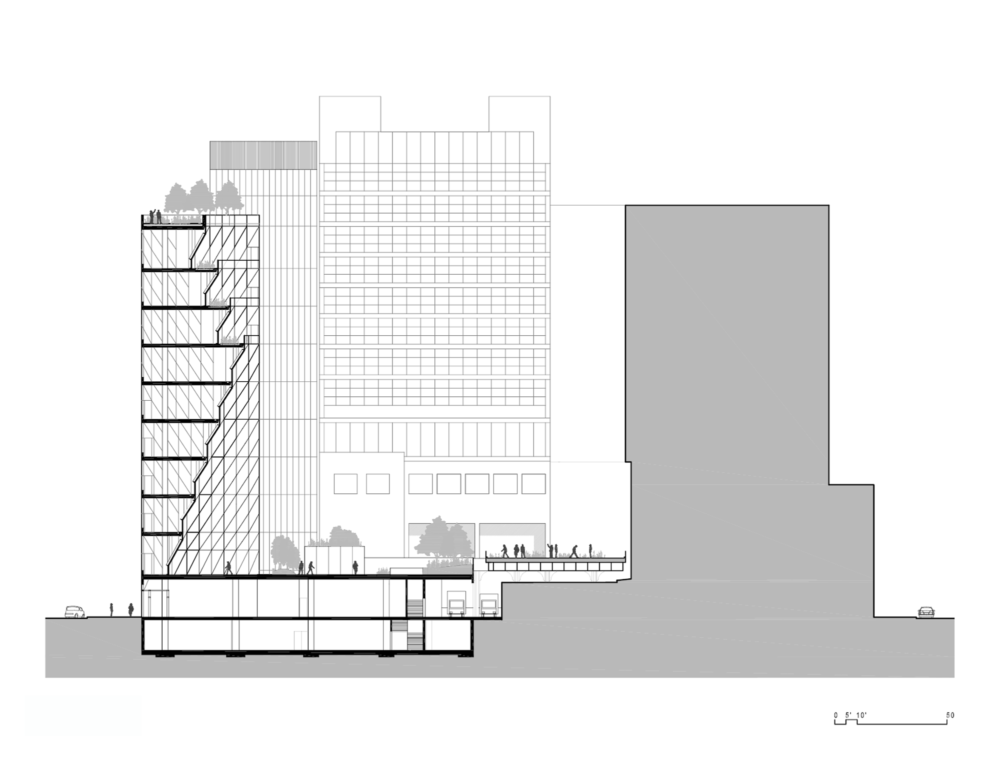 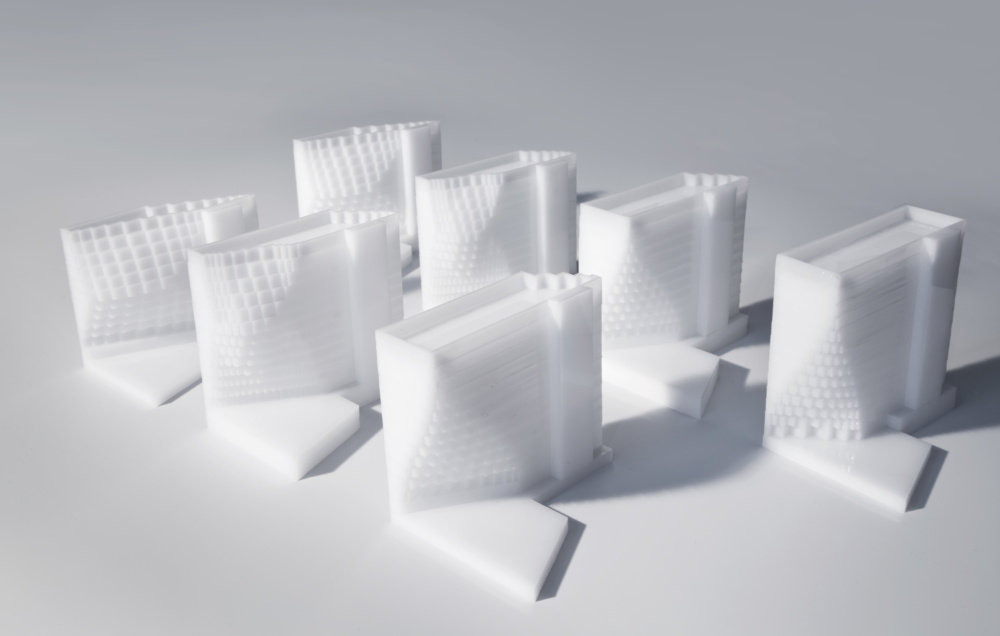 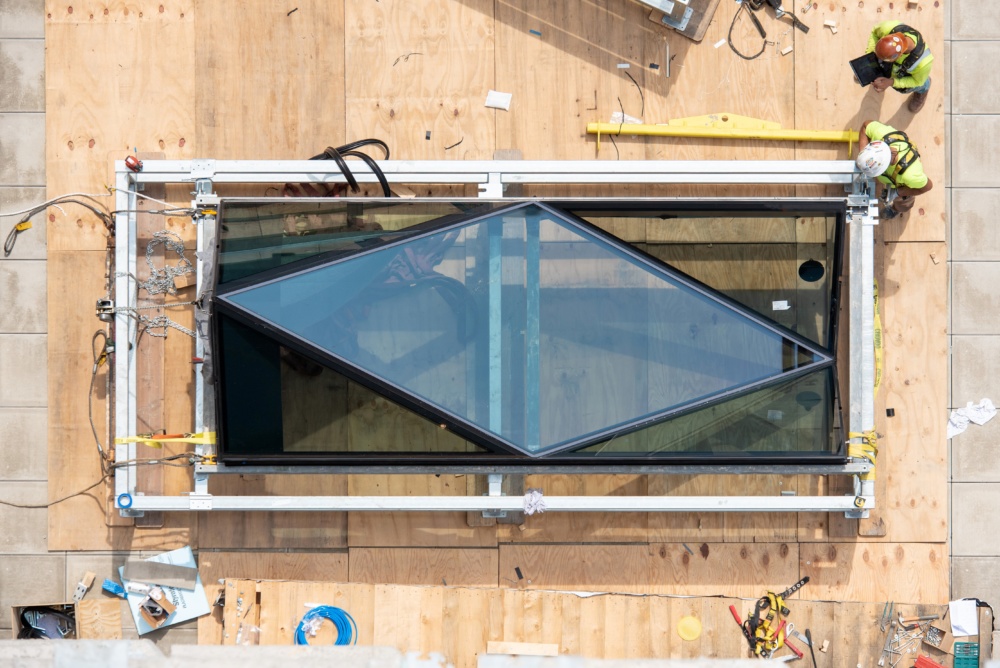 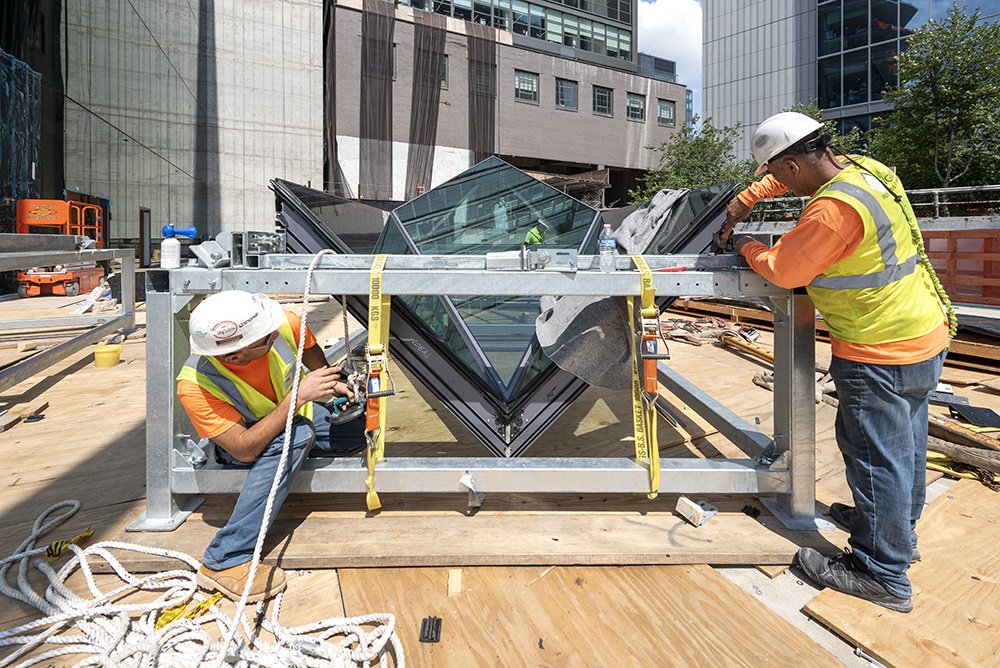 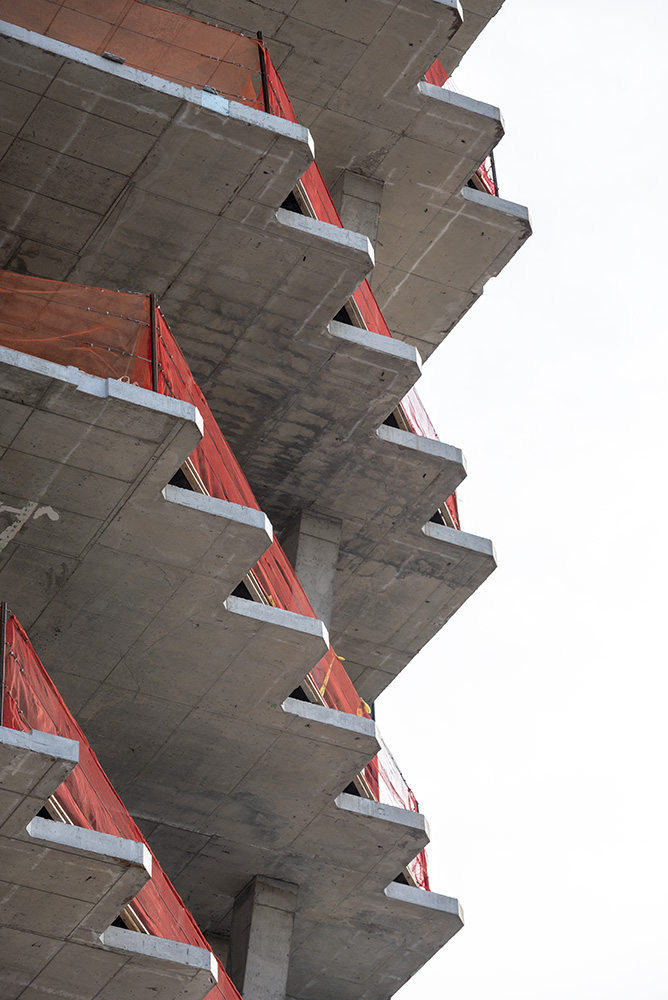 The most recent addition to an already impressive collection of architectural characters inhabiting New York City’s High Line, 40 Tenth Avenue offers a sculpted massing that will maximize its solar exposure along the public park. The project, led by Studio Gang, is situated between the Hudson River and the High Line, with a primary west-facing orientation. To minimize the afternoon shadow cast onto the park, the architects developed a uniquely inverted, stepped setback shape to the building.

Clad in a high-performance curtain wall from Italian firm Focchi, the tower integrates 12 types of glass. Despite a rather complex massing, the geometry of the enclosure was refined into a canted, diamond-shaped panel, surrounded by triangulated panels set perpendicular to the slab edges. The overall effect is a faceted, three-dimensional version of the architectural corner—perhaps a recasting, or import, of the Miesian corner to one of Manhattan’s most significant public spaces.

The project adds to a portfolio of high-rises designed by the Chicago-based practice (which also has offices in New York, San Francisco, and Paris) that explore “solar carving” as a formal and performative strategy. “’Solar Carving’ is one strand of a larger body of research about how we can make buildings responsive to the specific qualities if their context and climate,” said Studio Gang design principal Weston Walker. “To maximize sunlight, fresh air, and river views for the public park, we pushed the building toward the West Side Highway and carved away from its southeast and northwest corners according to the incident angles of the sun’s rays.”

A growing issue for the High Line is the diminishing degree of sunlight caused by the development of Manhattan’s Far West Side. According to Walker, the city’s prevailing 1916 Zoning Resolution—legislation that mandated ziggurat-like setbacks to boost ventilation and light for city streets—did not anticipate the proliferation of midblock public spaces such as the High Line. “As-of-right zoning would have endangered rather than protected the park by allowing the tower to be built directly over the High Line.”