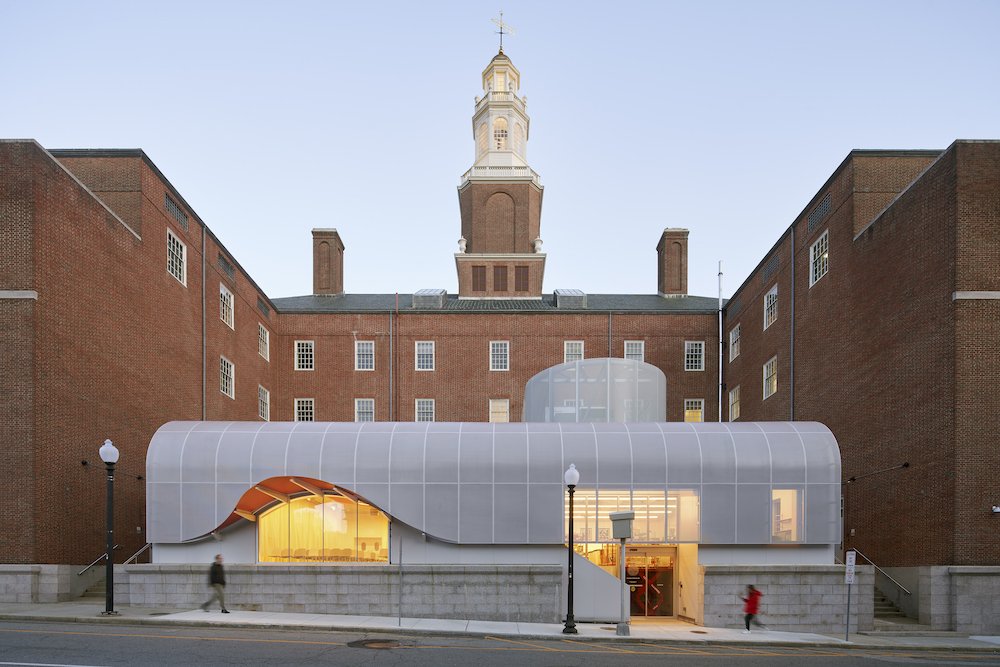 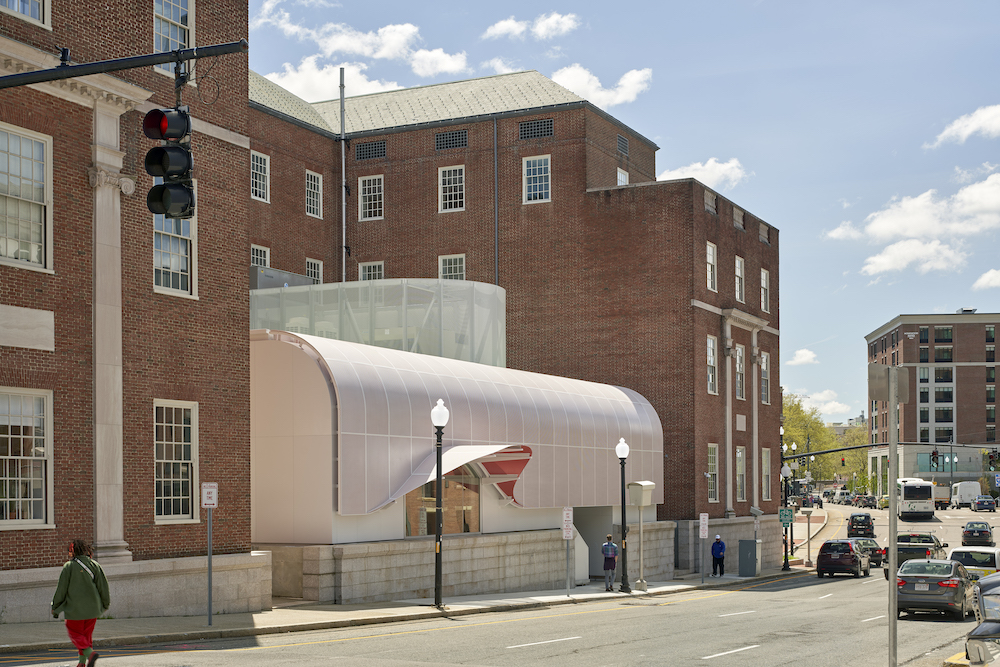 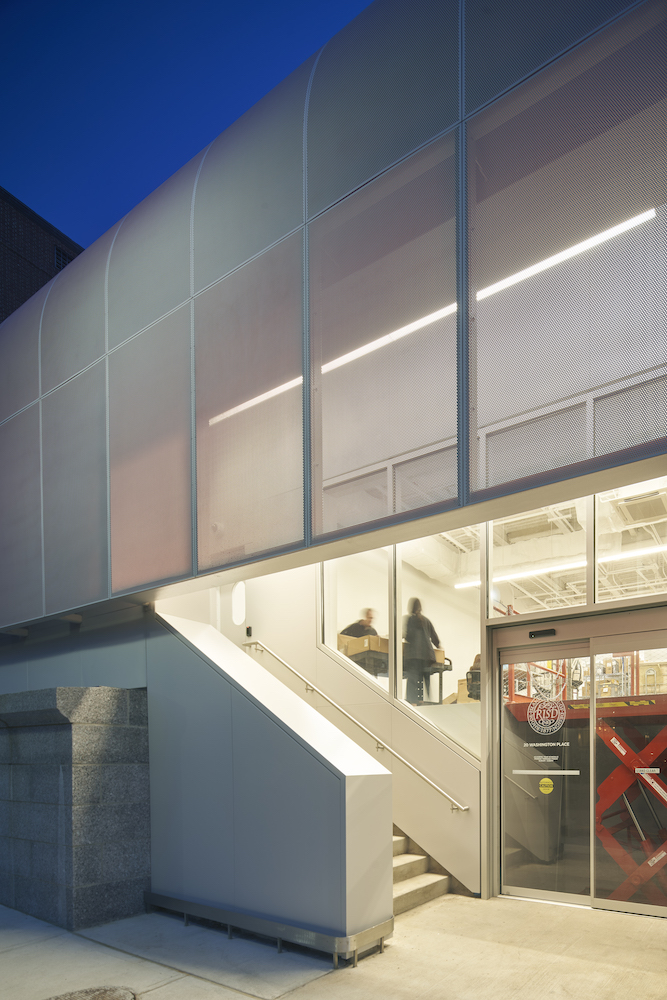 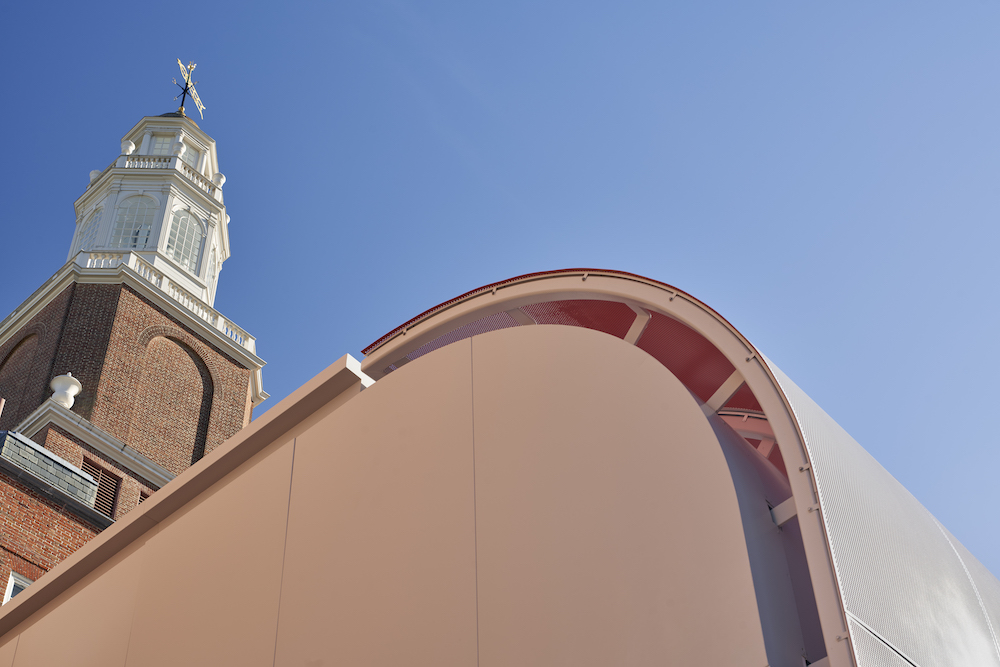 Providence, Rhode Island’s, College Hill is home to one of the finest collections of historic structures in the country, ranging from formal Federal to the ostentatious English Baroque. Both the campuses of Brown University and the Rhode Island School of Design (RISD) are based in the historic district and have over time absorbed numerous buildings in the area—the former Providence Washington Insurance Company (PWIC) was built in 1949 and acquired by RISD in 1988. In August 2019, WORK Architecture Company (WORKac) completed a substantial internal renovation of the property as well as an addition clad in curved anodized and perforated aluminum panels.

The single-story addition is located in the forecourt of the PWIC, which was most recently used as a surface parking lot. Facing west, the Steeple Street elevation is the public face of the addition and principally functions as a loading dock for the mailing facility found within. This utilitarian purpose does not, however, dampen the playful qualities of the primary elevation.

The project is not WORKac’s first use of perforated aluminum and past lessons were applied here. “We had been working with perforated metal for our Miami Museum Garage project and had noticed that since we back-painted the material (bright pink in that case), it created an effect where the facade looked white from the front and gradually more pink as you moved to the side. The light grey of the perforated metal is taken from the color of the granite pilasters and accents of the building, and it is back-painted a dark red to match the color of the brick,” said the studio. “From the side, the facade becomes redder, and it has an interesting mottled effect that in a way mimics the roughness of the brick surface.”

Coloration was not the only tool used by WORKac to blend the extension with the PWIC. Individual panels on each facade layer are clearly defined by joints and seams, which, coupled with an oversized caricature of an eyebrow dormer found at the auditorium, are a lighthearted nod to contextual historic detailing.

The aluminum panels are 45-inches wide—keeping the width under 48 inches limited the waste associated with fabrication—and rely on two systems. The solid anodized panels are clipped to a system of three-inch-by-three-inch HSS steel tubes that are bolted to the primary structure. One-inch gaps between the anodized aluminum panels were utilized to accommodate a series of steel-plate trusts, which in turn support the perforated aluminum panels.

Although the PWIC is a comparatively young building, WORKac conducted an extensive replacement of the outdated mechanical system and renovated the interiors, all under the purview of local preservation authorities. “Since everything also had to be reviewed by the State Historic Preservation Office and by the downtown Providence historic district review—and we were dealing with many different clients for the incredibly diverse program of spaces—we had to manage a very diverse range of interests and requirements for the design,” continued the studio. “Like many architectural challenges—from budgets to building codes—the net result of having to really think through the various intersections and potential roadblocks in the end ensured that the approach had a solid concept and well-researched solutions that enabled us to argue its merits for all the stakeholders, which made the project that much stronger.”