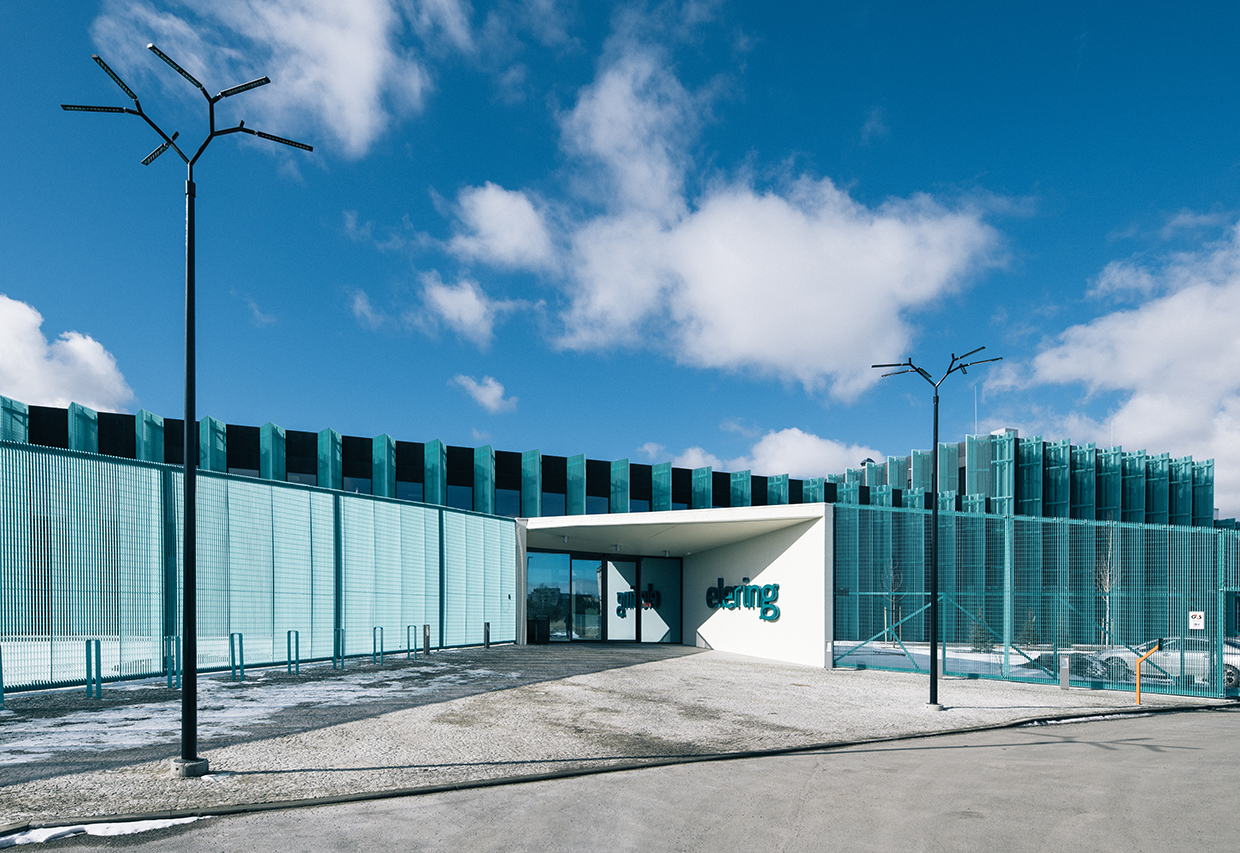 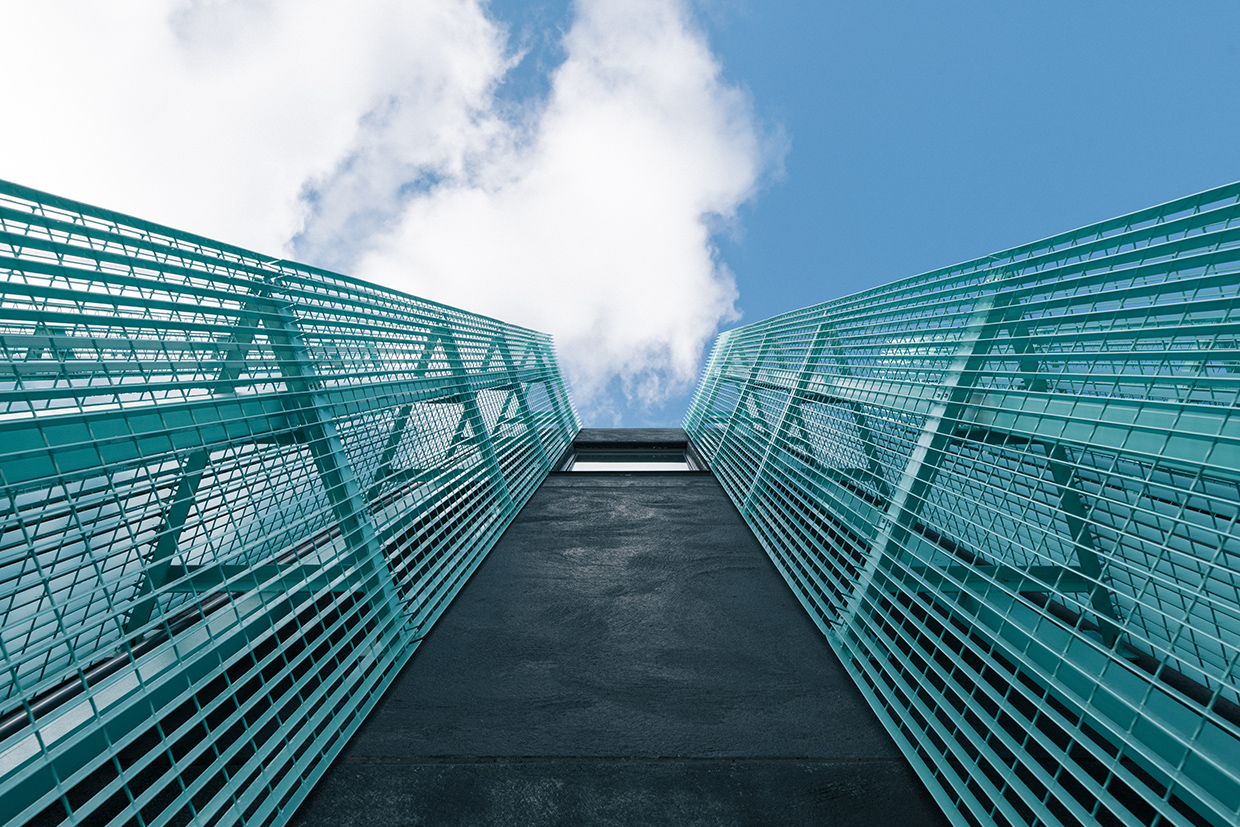 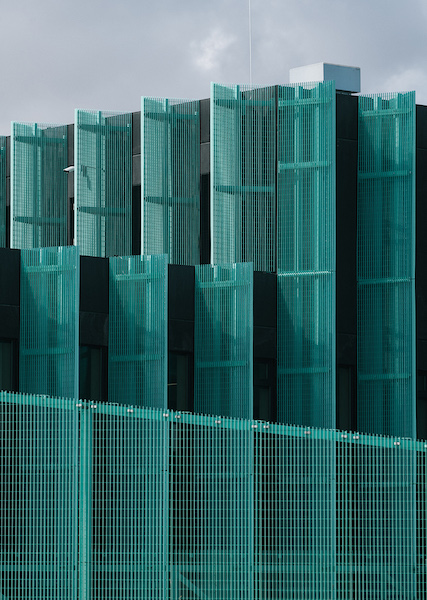 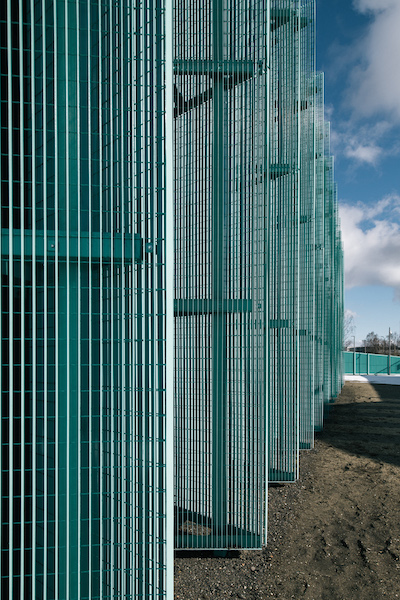 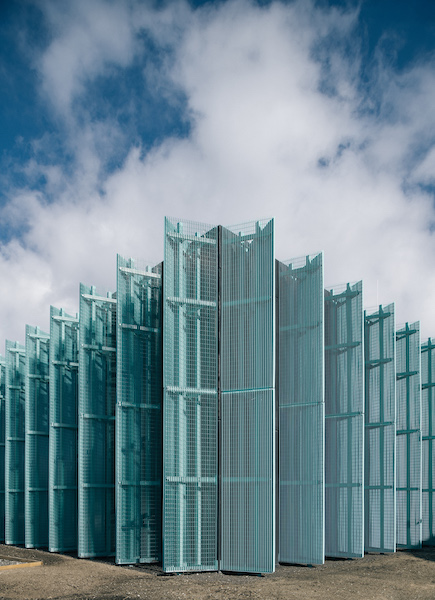 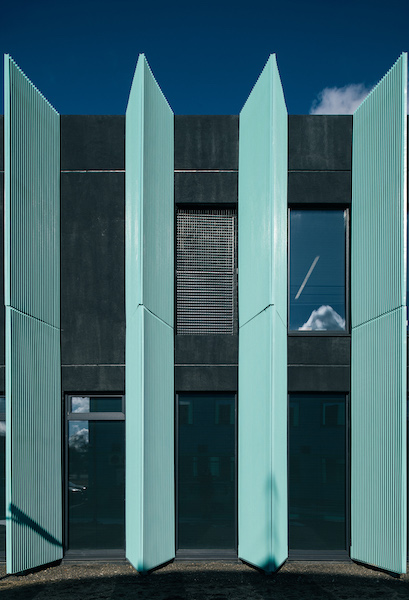 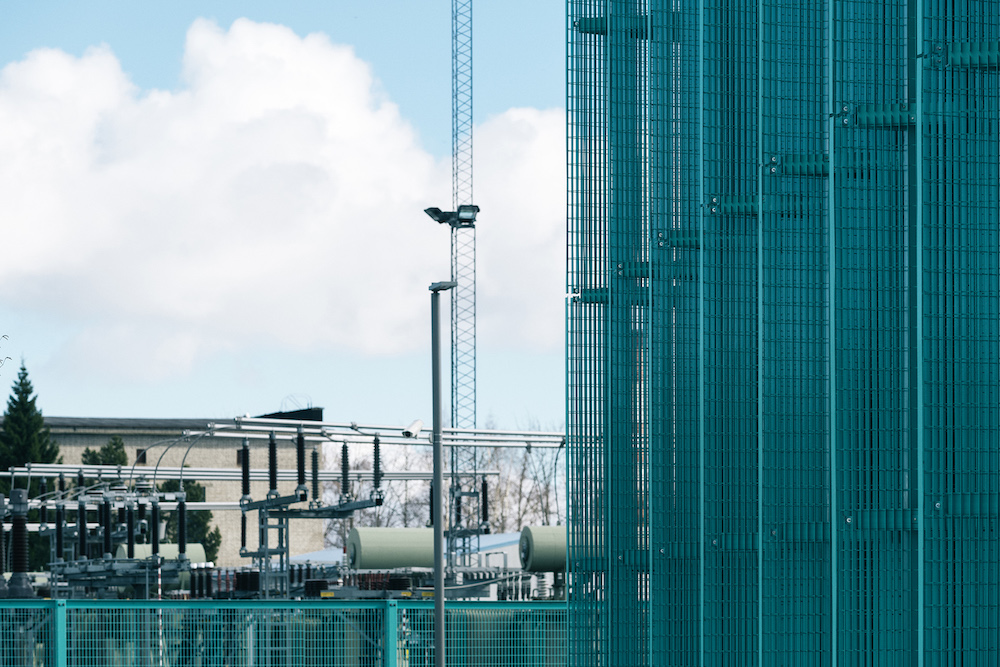 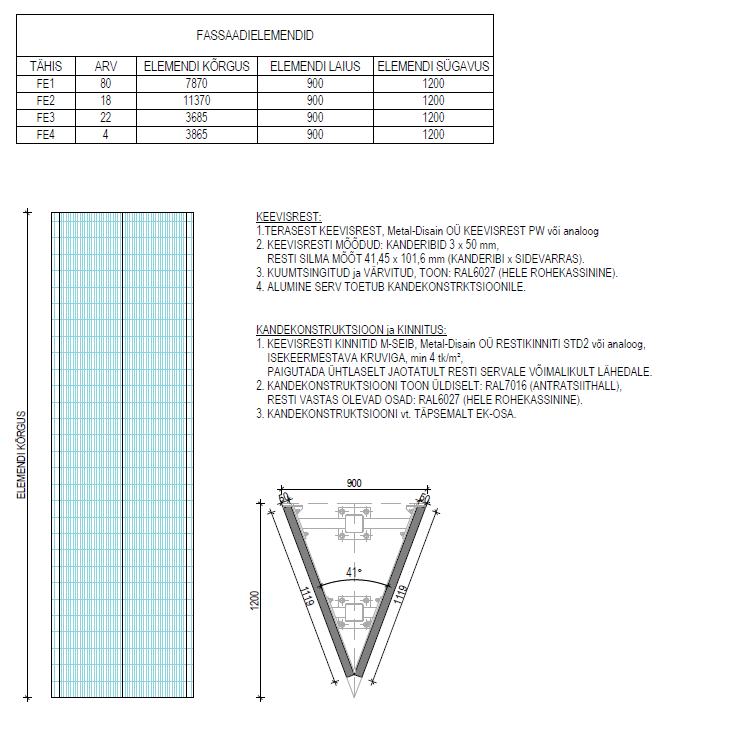 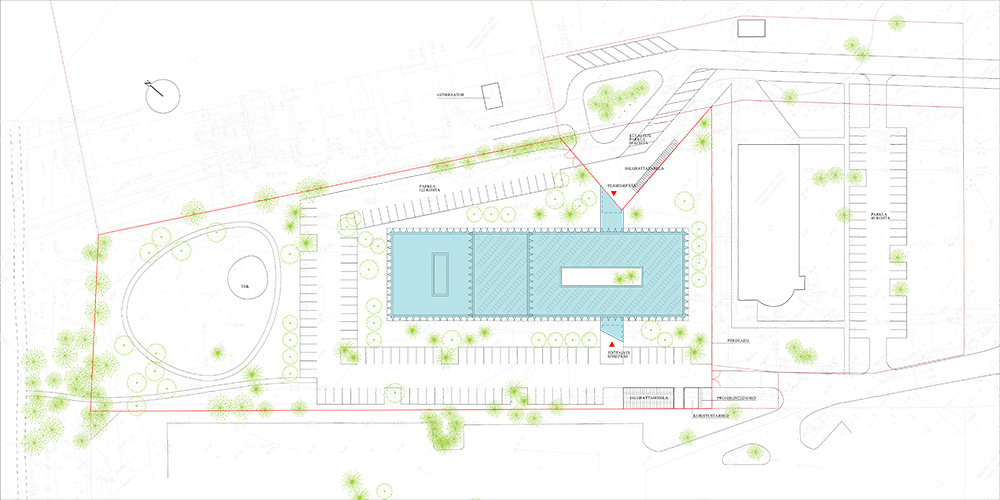 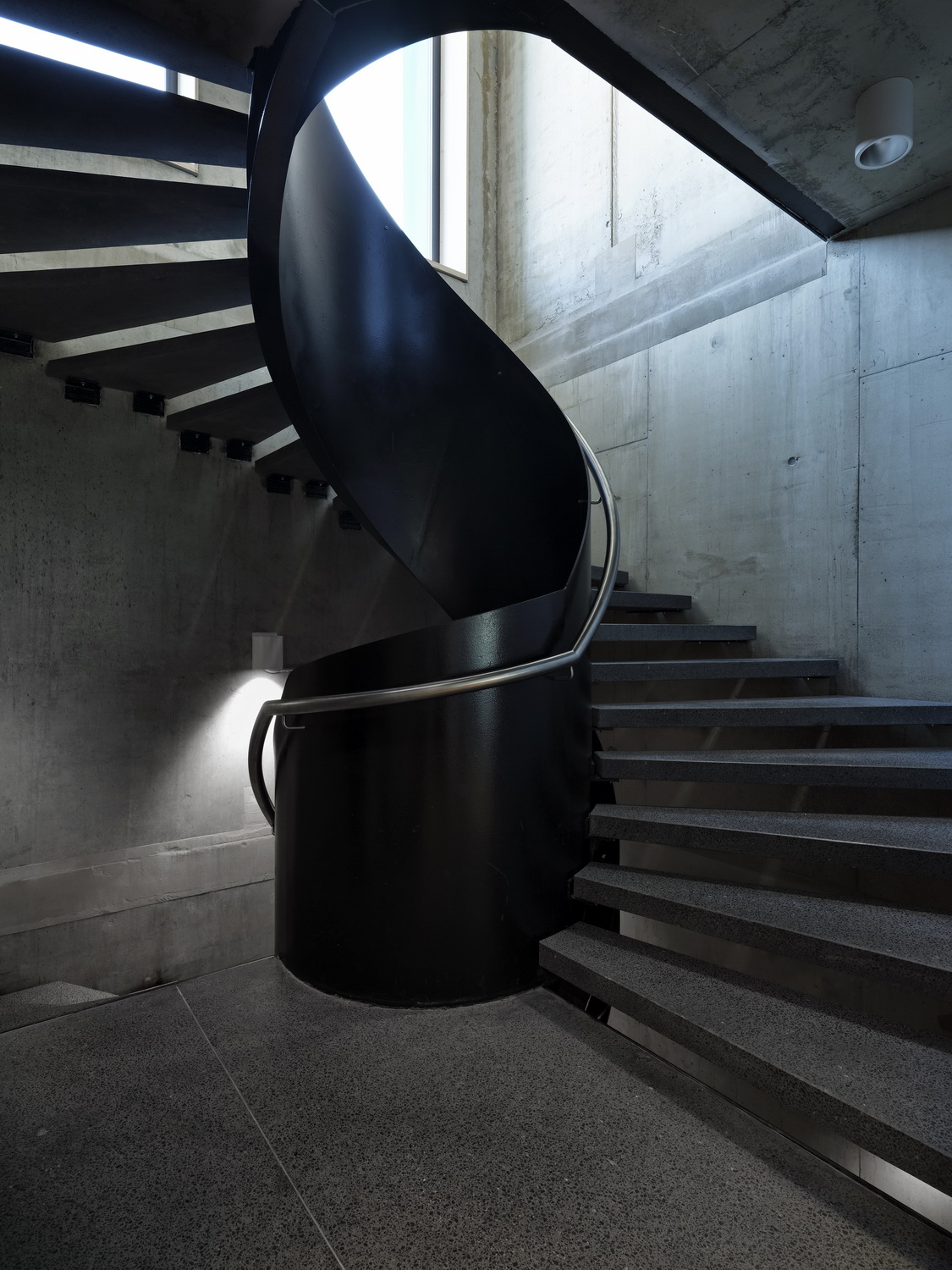 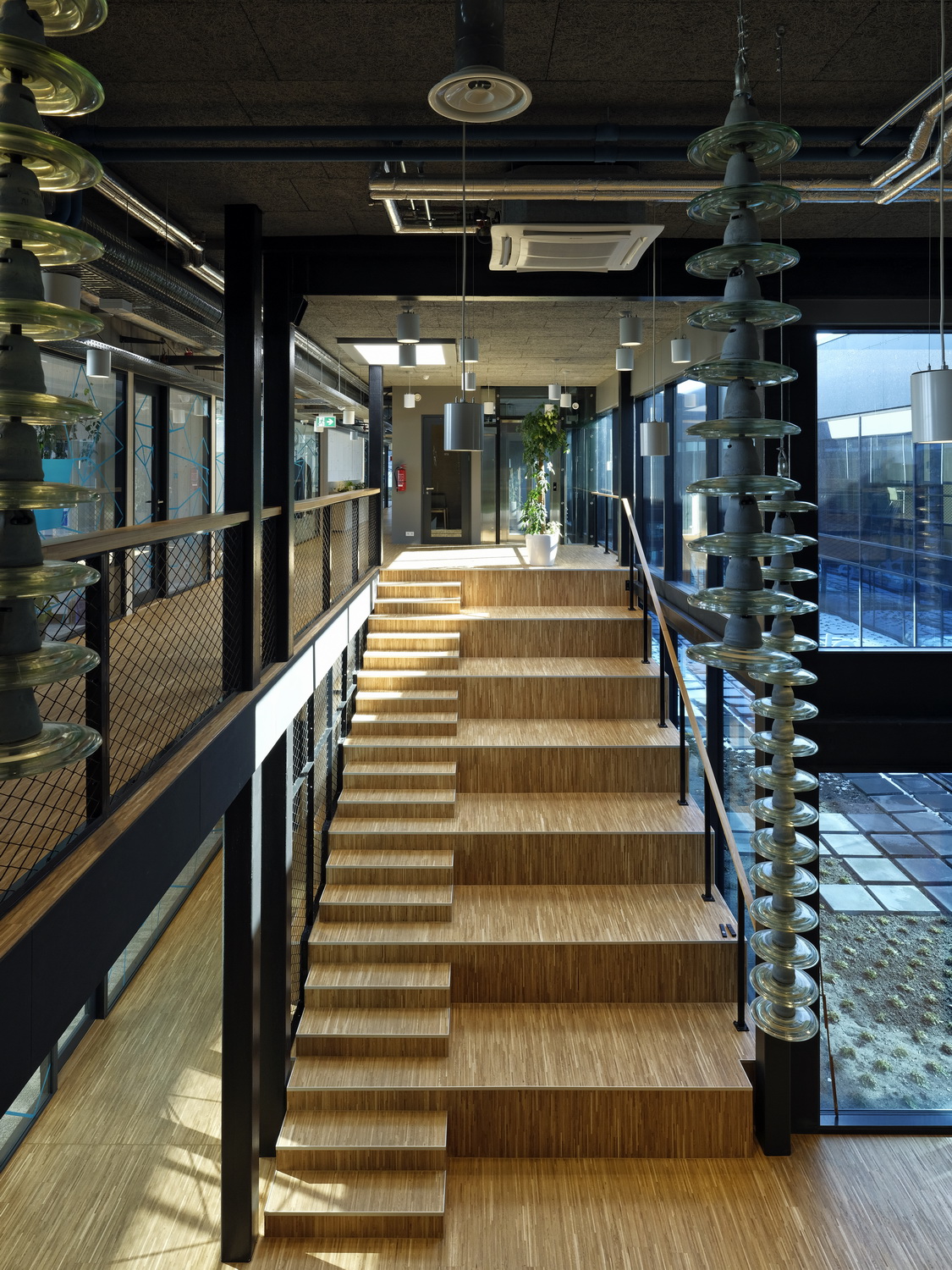 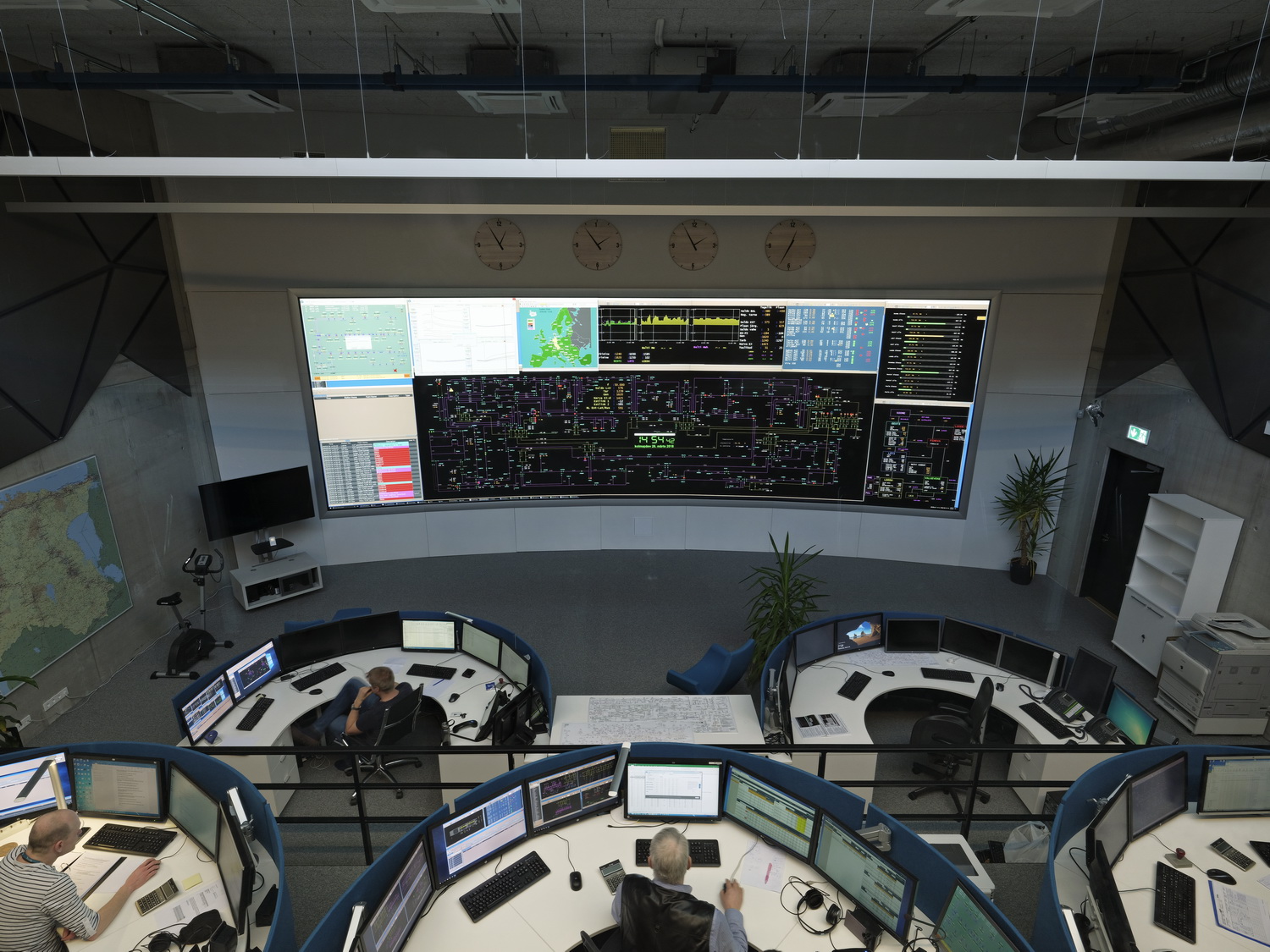 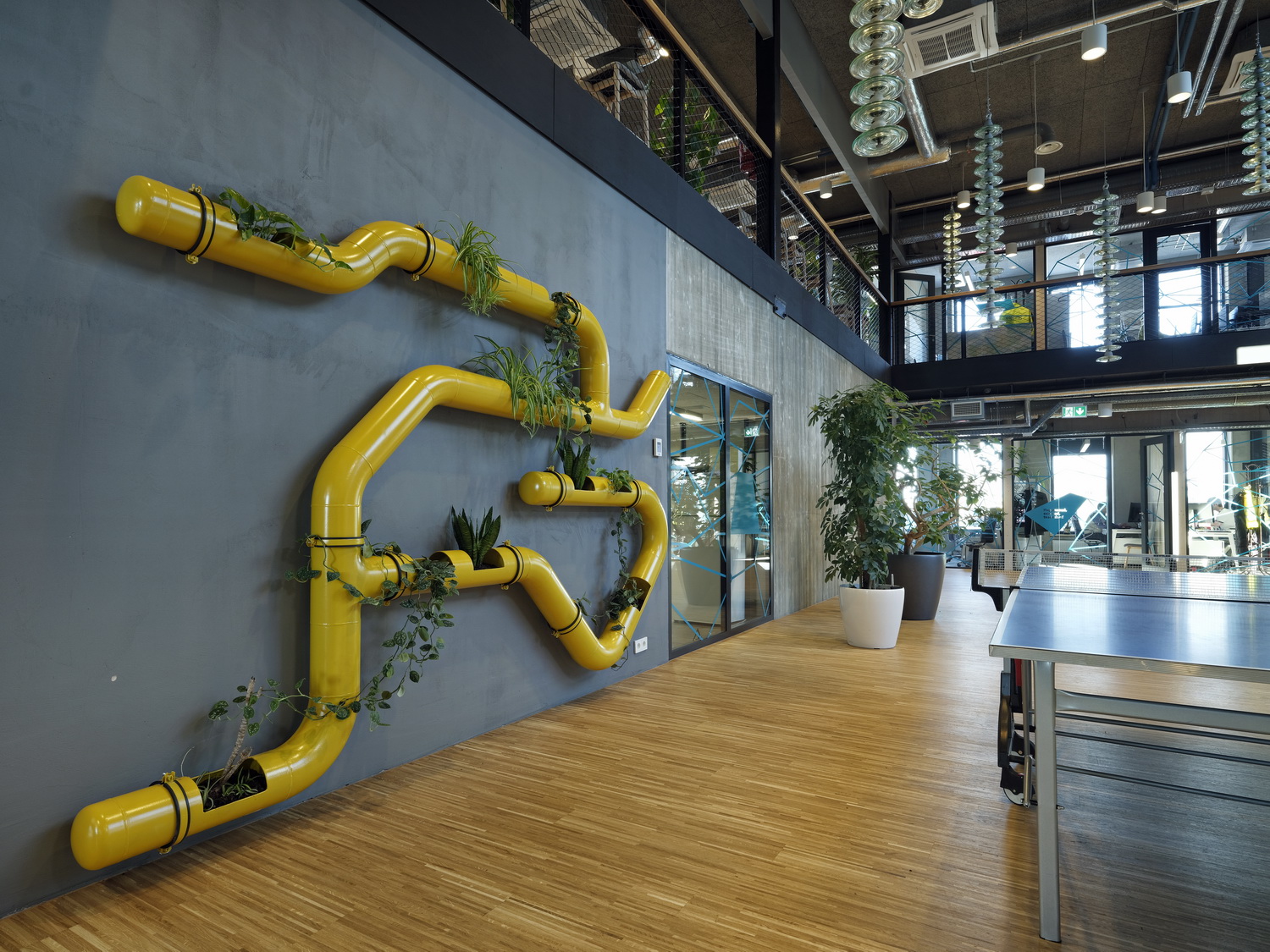 Estonia-based architectural practice molumba has enlivened a suburban office block with a unique concrete and aluminum screen assembly. The project was commissioned by AS Elering—the nation’s largest transmission systems operator for electricity and natural gas—as a dramatic, three-fold expansion of the preexisting structure in Mustamäe, a southwestern neighborhood in the nation’s capital of Tallinn.

Over 140 turquoise mesh piers ring and visually buttress each elevation, a play on historical castellation and Gothic design found throughout Tallinn’s Old Town. The piers are built of full-length aluminum strips measuring 12 to 41 feet, which are in turn welded to a series of connecting bars. Each pier possesses its own steel support structure consisting of two internal, vertical columns fastened to the welded connecting bars.

The design of the complex references the spindly and bundled power line, a ubiquitous feature across urban landscapes. AS Elering operates a multi-acre electrical substation next door. According to design lead Karli Luik, molumba envisioned the project as “the brain of the electricity and gas transmission network, monitoring and administrating their vitally important circulation.” As a vitally important aspect of Estonia’s energy infrastructure, the entire 40,000 square-foot complex is ringed by a perimeter wall fashioned of the same turquoise aluminum screen.

For molumba, the bigger question was how to give the mesh triangles a truly functional quality outside of their aesthetic elements. The two planes of the piers form an acute isosceles triangle: the two congruent sides measure just under four feet while the base is approximately three feet. This shorter edge is placed atop the building’s 20 by 10 foot black precast concrete panels and wedged between window openings. With a 41-degree circumcenter angle, the piers function as effective passive sun shades for office functions within. Additionally, the mesh frame serves as an industrially-produced lattice screen for future vegetative growth to coil up the facade.

The interior, designed by Stuudio Oü, features a design that similarly echoes the building’s utilitarian function. Spiraling stairwells, built of concrete and steel, vertically course through the east and west elevations of the headquarters, while exposed pipes, cables, and pendant lamps made of recycled insulators line the ceiling and walls. A central vegetative courtyard and a two-story, wood-paneled stairwell, with steps of varying size, are the office block’s principal communal areas. At the core of it all lies the “Brain,” where the nation’s energy transmission network is surveilled through a hippodrome of monitors.