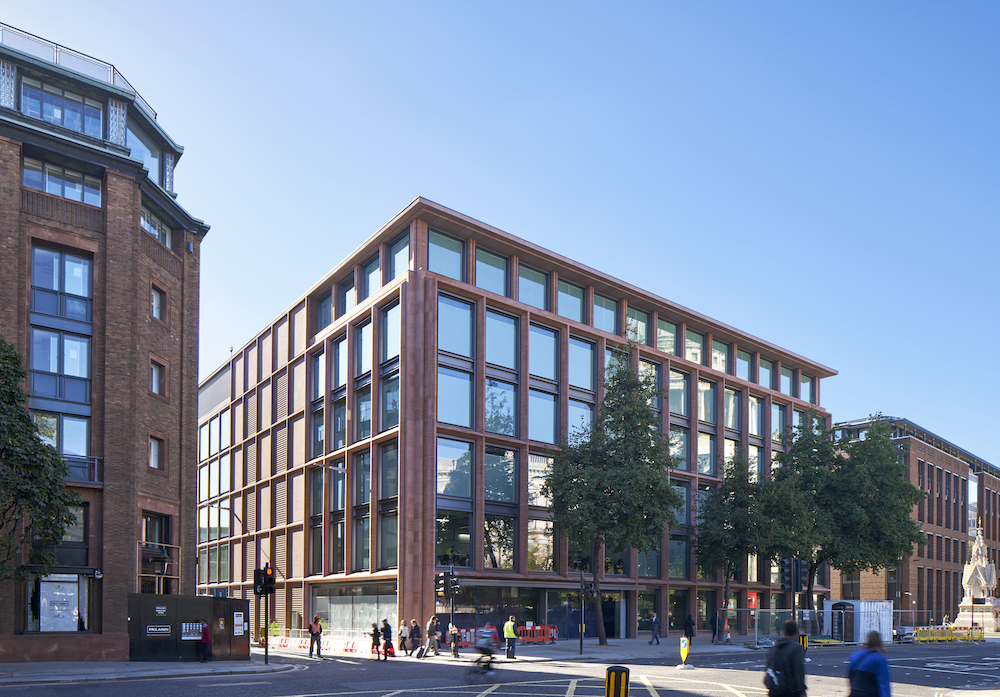 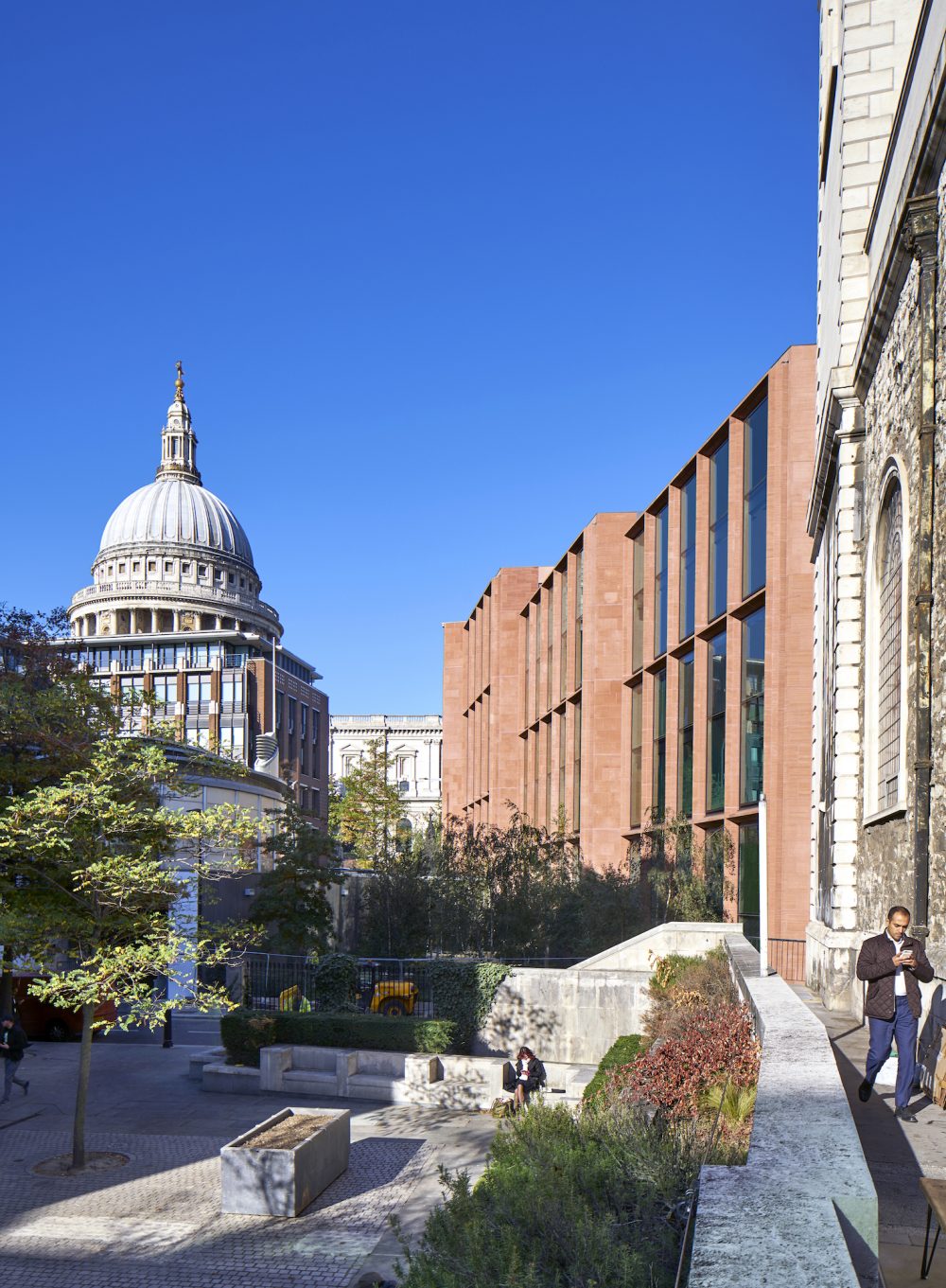 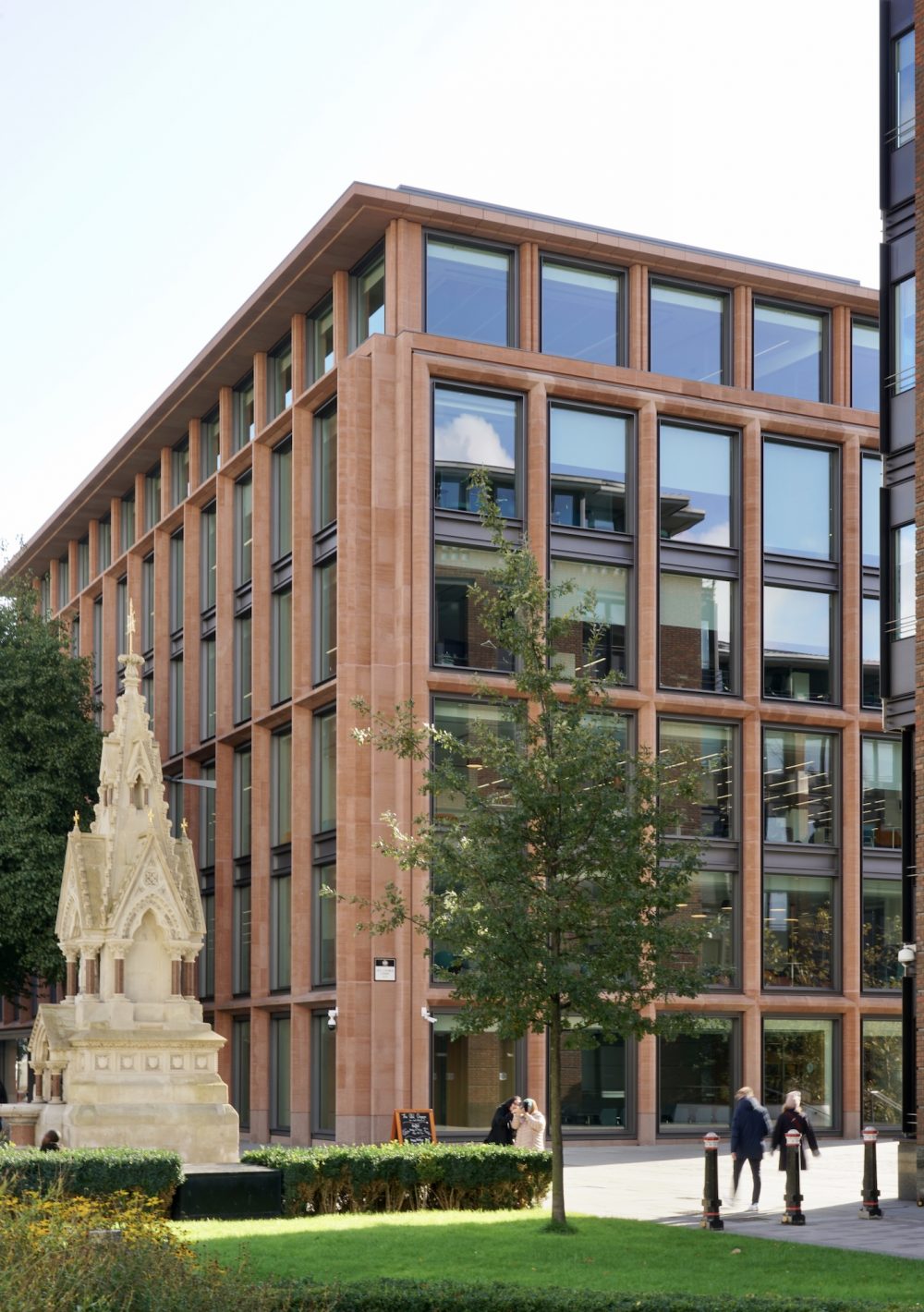 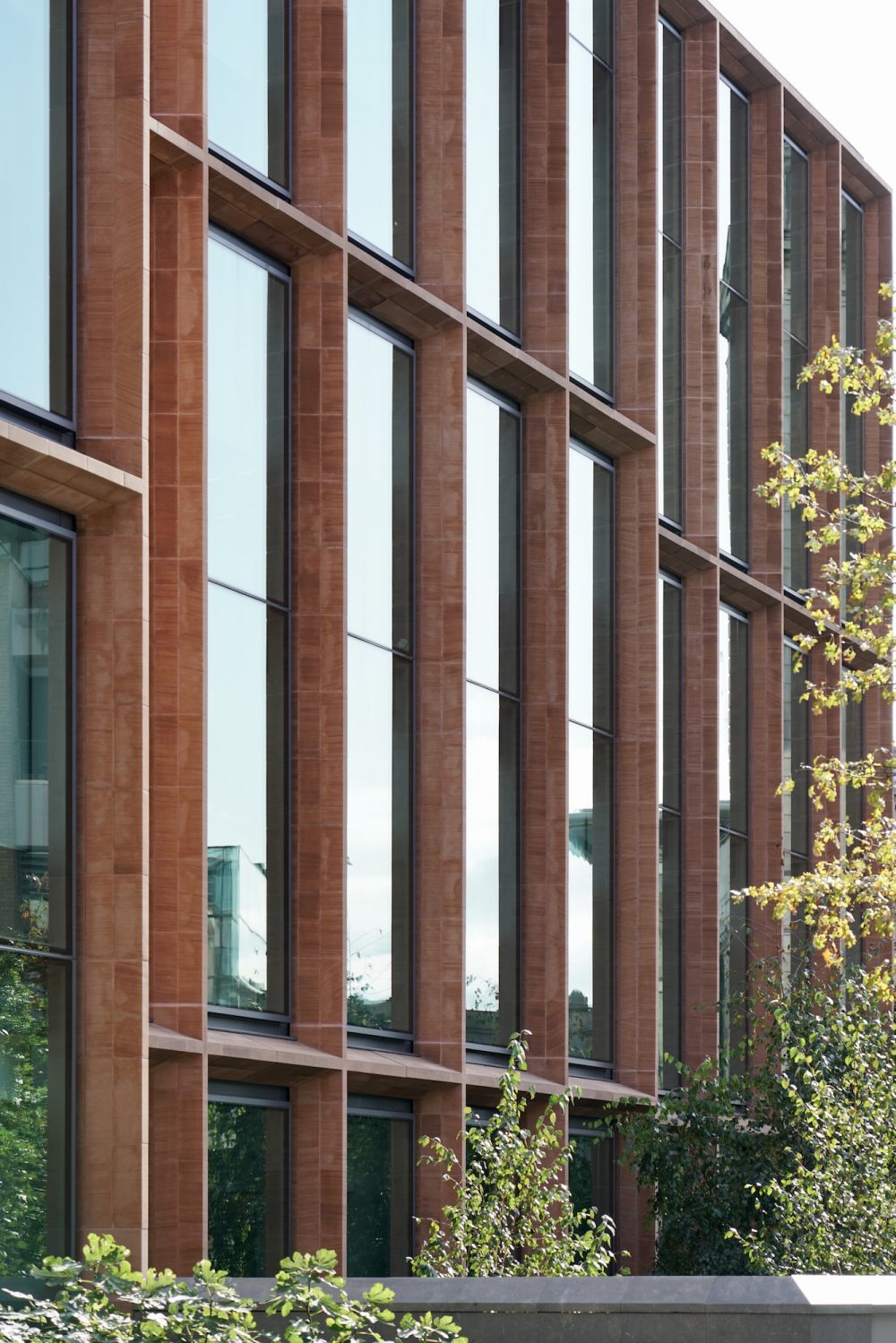 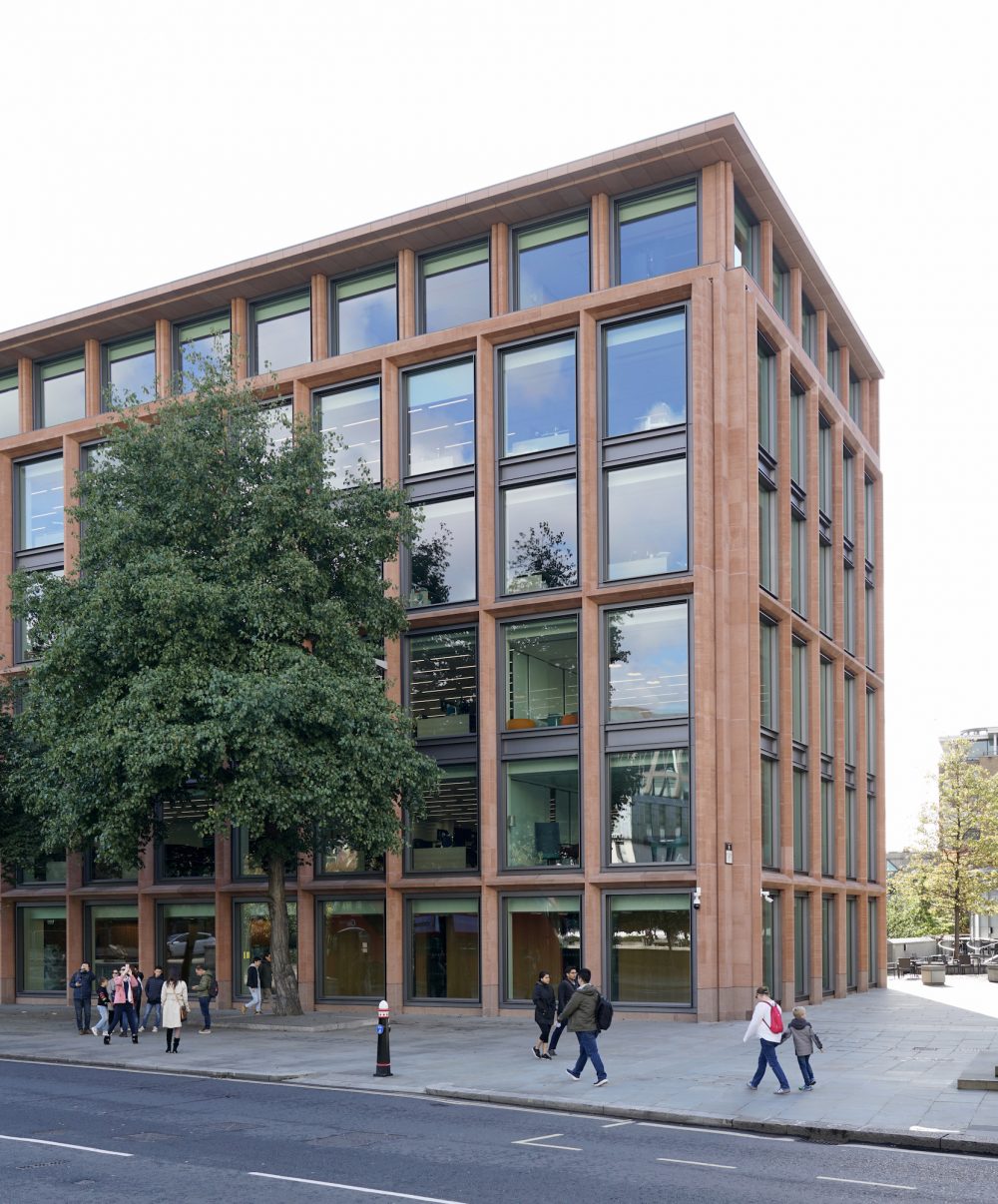 <
►
>
4 Cannon Street, a recent project by PLP Architecture, is located in the heart of London and is clad with stone-faced precast concrete panels. (Michel Denance)

The City of London, the historic core and central business district of the metropolitan region, is a high-density patchwork of contradictory architectural styles dating from across centuries. 4 Cannon Street, a corporate headquarters designed by London’s PLP Architecture, recently joined this eclectic scene and succeeds in establishing a fine balance between past and present with articulated reddish-brown sandstone panels framing unitized glass-and-aluminum bays.

The approximately 155,000-square-foot project rises on the former site of London’s Scandinavia House—demolished once initial studies proved retrofit to be cost-prohibitive—and is located a stone’s throw from architectural icons such as the English Baroque St. Paul’s Cathedral and St. Nicholas Cole Abbey, as well as the Neoclassical-High-Tech hybrid of Bracken House. “The surrounding office buildings are built of dissimilar materials: glass, brick and some Ham Hill sandstone trim of a similar, reddish-brown color,” said PLP founding partner Karen Cook and partner Daniel Moore. “We proposed that the new building color should harmonize with the office building context and contrast with St. Paul’s Cathedral and St. Nicholas Cole Abbey.”

To that end, and to address the client’s desire for a facade material more forceful than brick, the design team suggested the use of the pinkish-red and pronouncedly striated sandstone Plumpton Red Lazenby—typically quarried in the Northwestern county of Cumbria. The Grants Group, something of a one-stop-shop masonry specialist just outside of London, managed the sourcing of the sandstone and its fabrication as a veneer for precast concrete panels.

While the stone is indeed skin-deep, the visual impact certainly is not. Each mullion and spandrel is chamfered and protrude up to approximately 20 inches from the structure; a set back occurs at the sixth story clerestory, which is in turn topped by a slender cornice.

The in-built benefit of the protruding sandstone-and-concrete panels is passive shading for the unitized aluminum-and-glass curtainwall manufactured by German fabricator Permasteelisa Gartner. Each curtainwall module spans two floors is approximately 10′ by 13′ and is framed with I-beam shaped matte black aluminum.

The sheer weight of the stone-and-concrete panels proved a point of complexity for the facade system, and facade consultant FMDC played a critical role in designing a solution. “It was not possible to support the stone (which is cast onto pre-cast concrete) from the glazed panels as the weight was too much,” continued Cook and Moore. “Therefore, we needed to fix the pre-cast stone panels back to the building structure with separate brackets which actually penetrate through a hole in the solid part of glazed facade panels to take support from the structural slab,” continued Cook and Moore. “Penetrating the main cladding panel with a bracket brought challenges with the waterproofing, tolerances, assignment of responsibilities, sequencing, and thermal insulation, but all was resolved well due to good teamwork between Permasteelisa Gartner, Grants, PLP and FMDC.”