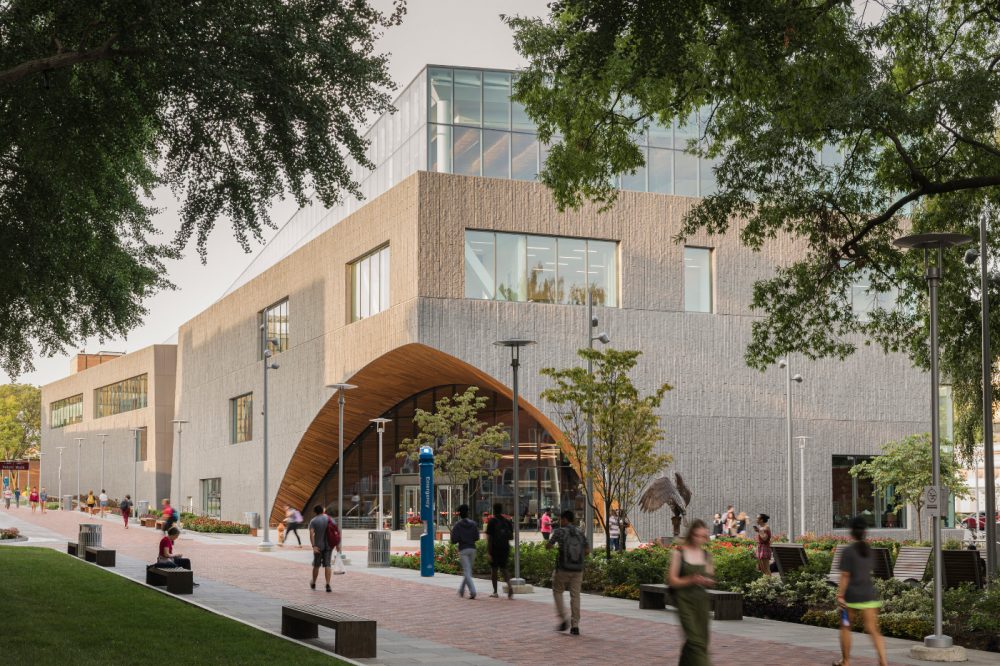 <
►
>
The Charles Library’s glass-encased fourth floor looks out into a lush, meadow- like green roof that's one of the largest in Pennsylvania. (Michael Grimm)

In designing the Charles Library at Temple University in North Philadelphia, Snøhetta wanted to make a contemporary statement that would integrate harmoniously into the pedestrian core of a leafy, architecturally diverse urban campus that is still largely defined by historic stone masonry edifices.

The resulting building, a research library clad in stone, wood, and glass and topped with one of Philadelphia’s largest green roofs, achieves this goal with aplomb. Completed in August 2019, the 220,000-square-foot library serves as a bold yet welcoming center of gravity for the surrounding landscape.

“In the course of identifying the strategic goals of the project, we identified a strong need for the library to be a magnetic heart of the campus—and embracing, so to speak,”said Snøhetta project manager Chad Carpenter. “It’s a place that people want to come to that’s at the heart of their path between all the different departments on campus.”

The designers wanted the library to reference the stately stone facades of neighboring buildings. After considering the use of precast concrete panels, the team ultimately chose an open-joint stone rainscreen system when budget calculations showed that the former would not be viable. Six-inch vertical sections of split-faced Mesabi black granite sourced from Minnesota-based quarrier and fabricator Coldspring clad much of the building.

“A lot of universities have a fairly rigid material palette, but Temple’s campus has evolved in a different way,” Carpenter said. “But a lot of the most important and oldest buildings on campus are stone buildings. And we picked up a little bit on the way in which those buildings used stone. We weren’t trying to make a contextual building. It’s a contemporary building that also speaks to the materiality, solidity, and durability of some of the best buildings on campus.”

Cut into the building are its main portals and pièces de résistance: soaring western red cedar archways that lead into a triple-height domed atrium lobby that’s also clad in a thicker version of the same ACGI cedar.

“Often in architecture there’s a desire to control color and texture, and to know exactly what you’re going to get,” Carpenter said. “Cedar has quite a bit of color tone variation so that when you have this geometry that’s all- encompassing and enveloping, that variation and liveliness in color and tone breaks it up and keeps it from becoming overwhelming.”

In addition to warmth and variation, cedar is particularly resilient in outdoor applications and easily bendable, which allowed the team to avoid cutting and carving the material using CNC machines. The cedar components were assembled flat and then shipped to the site, where they were bent.

The library’s swooping wood-lined portals help open the library to the rest of the campus. A smaller corner entry, which directly faces one of Temple’s busiest pedestrian intersections, creates a sheltered plaza that looks straight through the library’s sprawling lobby to a larger arched entry on the opposite side of the building.

“That sort of porosity of the building and embedding the desire lines of the campus right into the circulation flow of the library was very much part of the design,” said Carpenter.