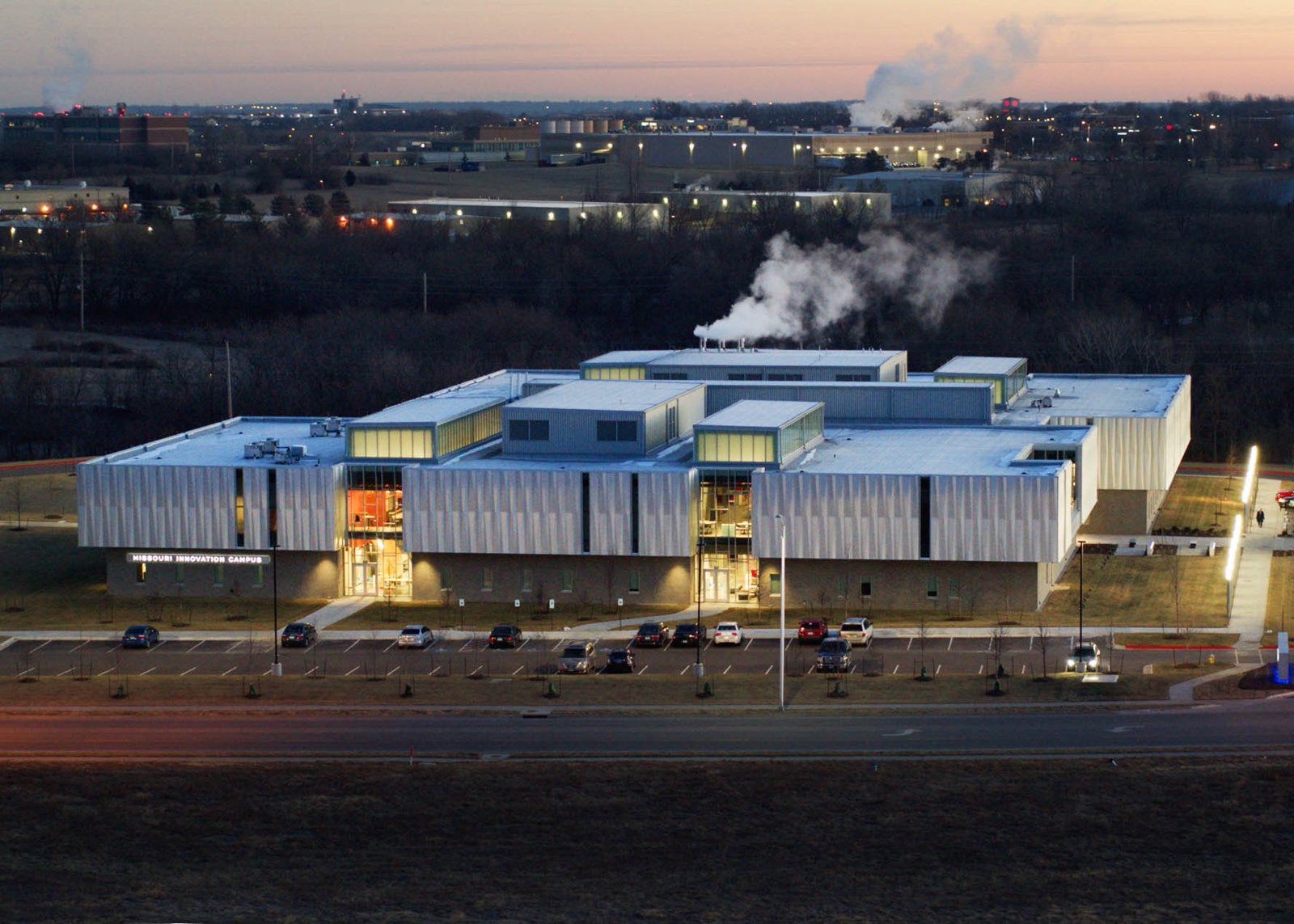 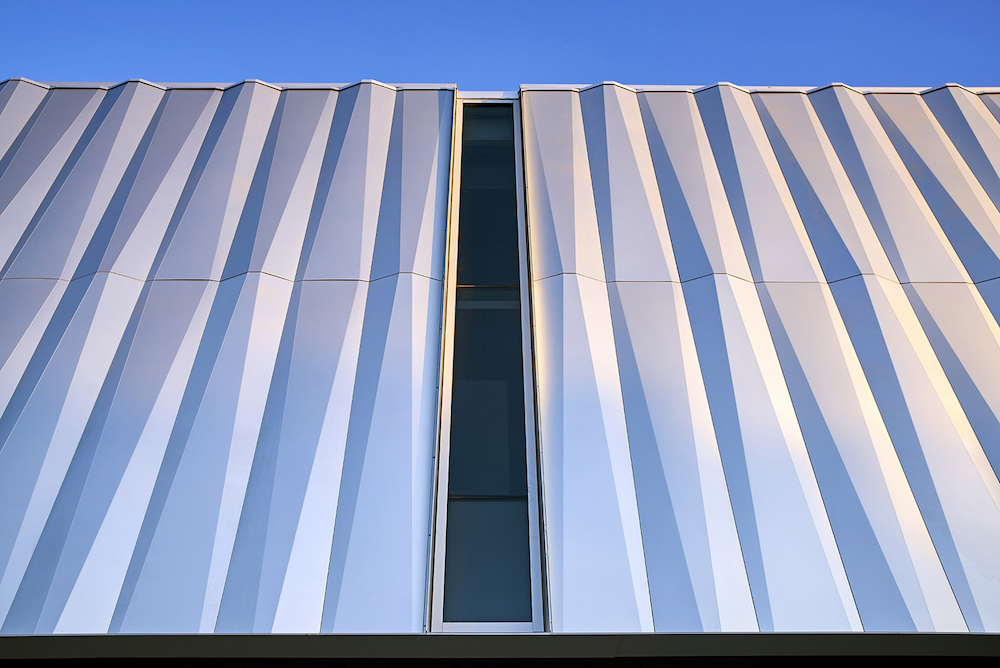 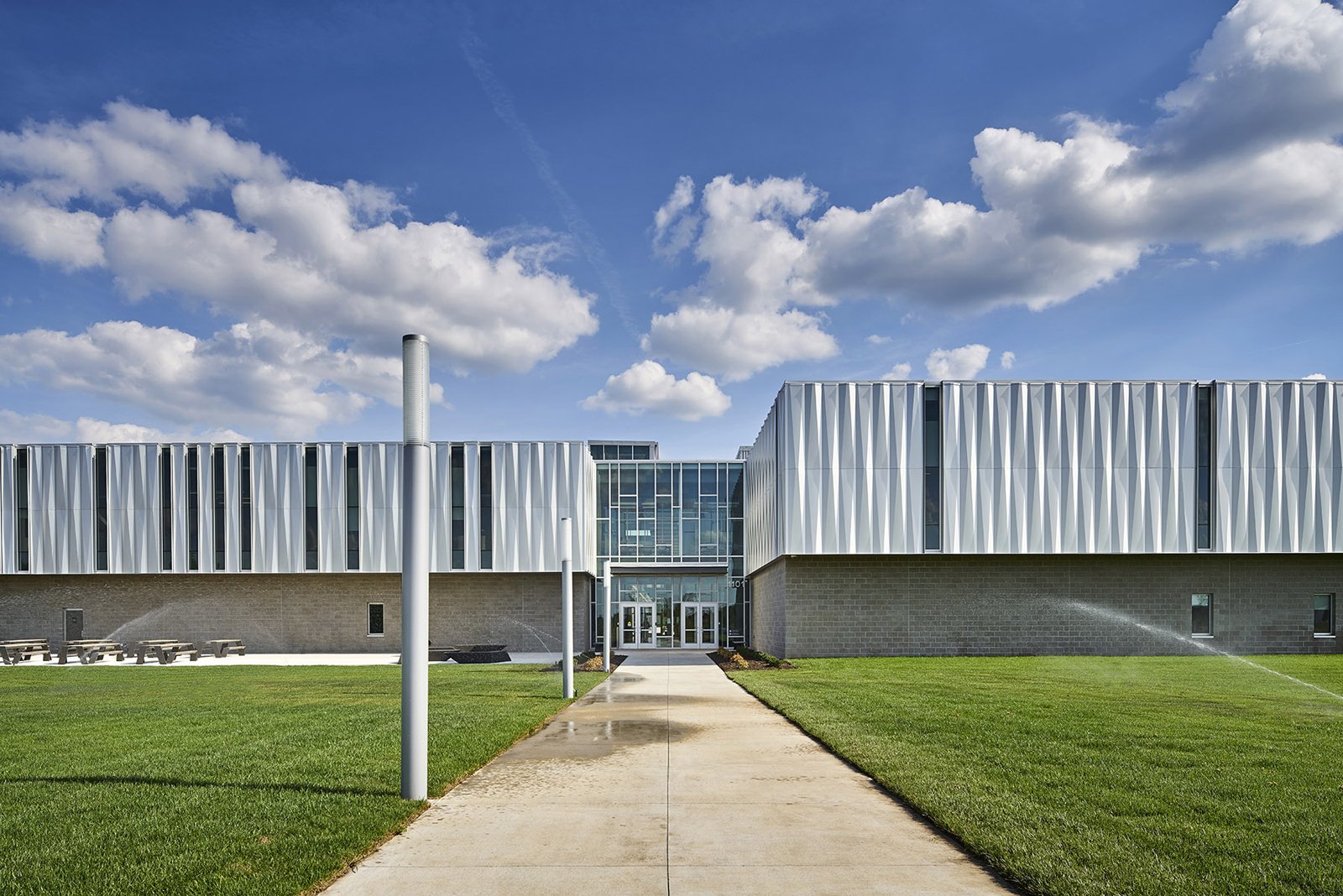 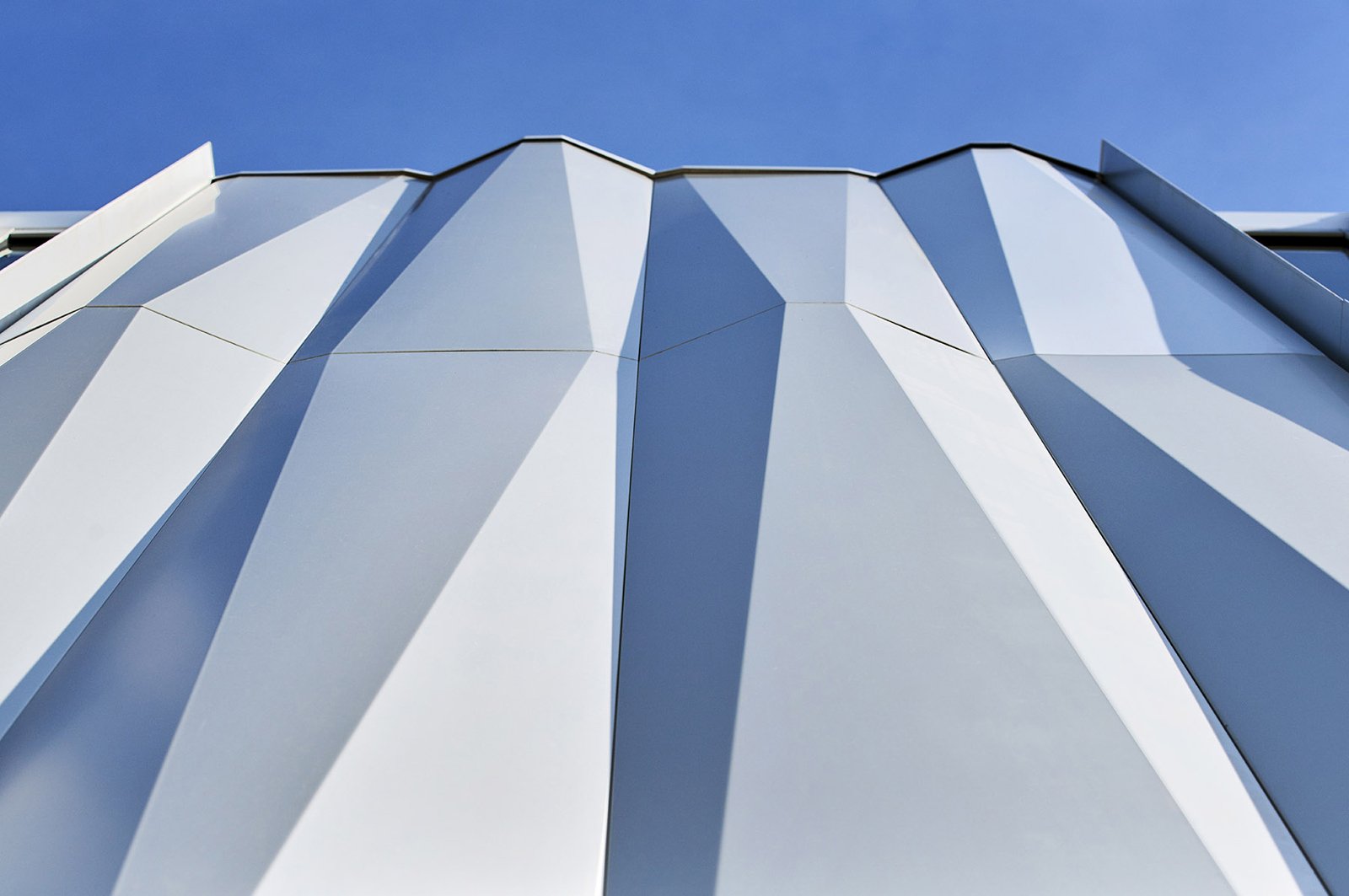 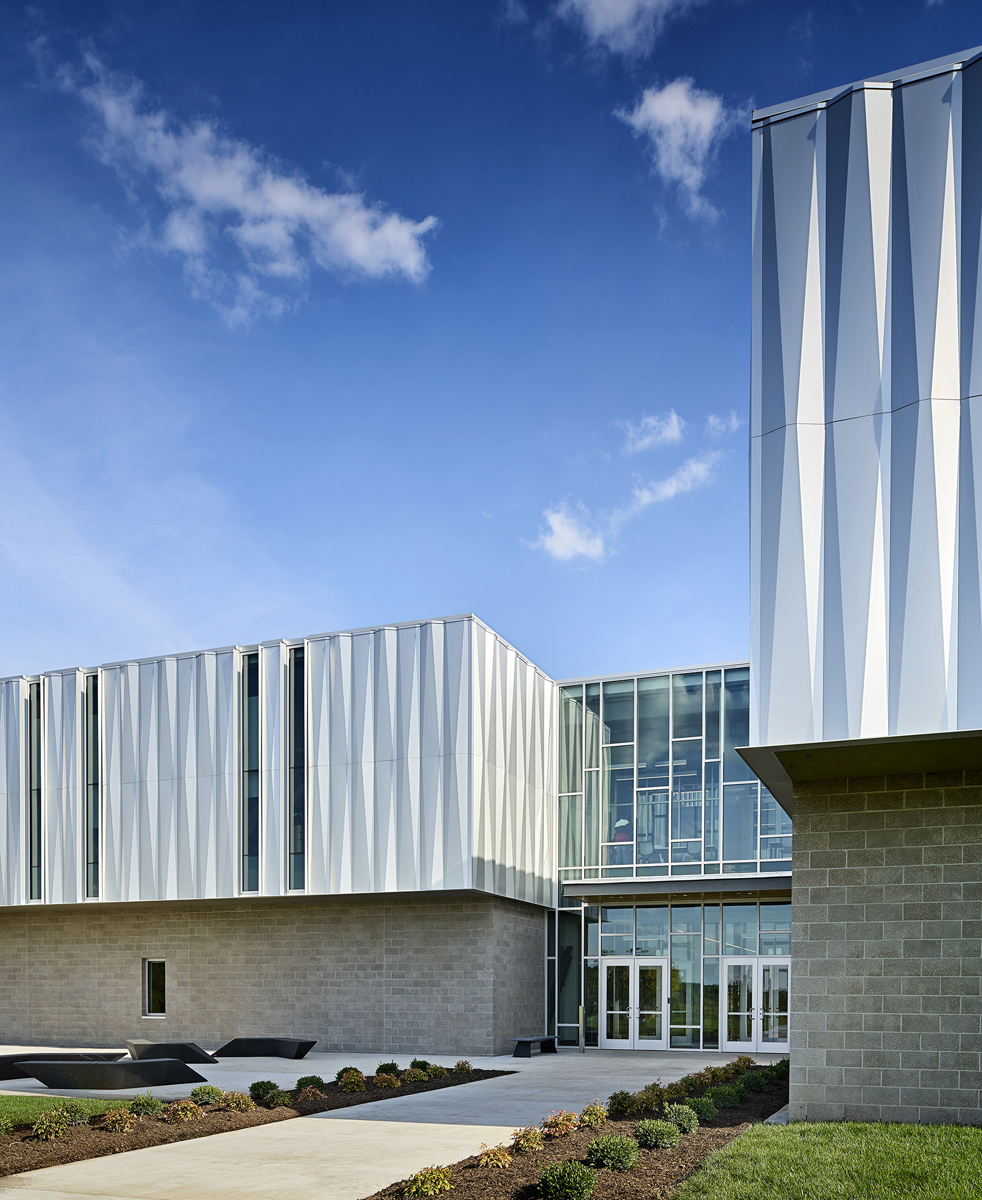 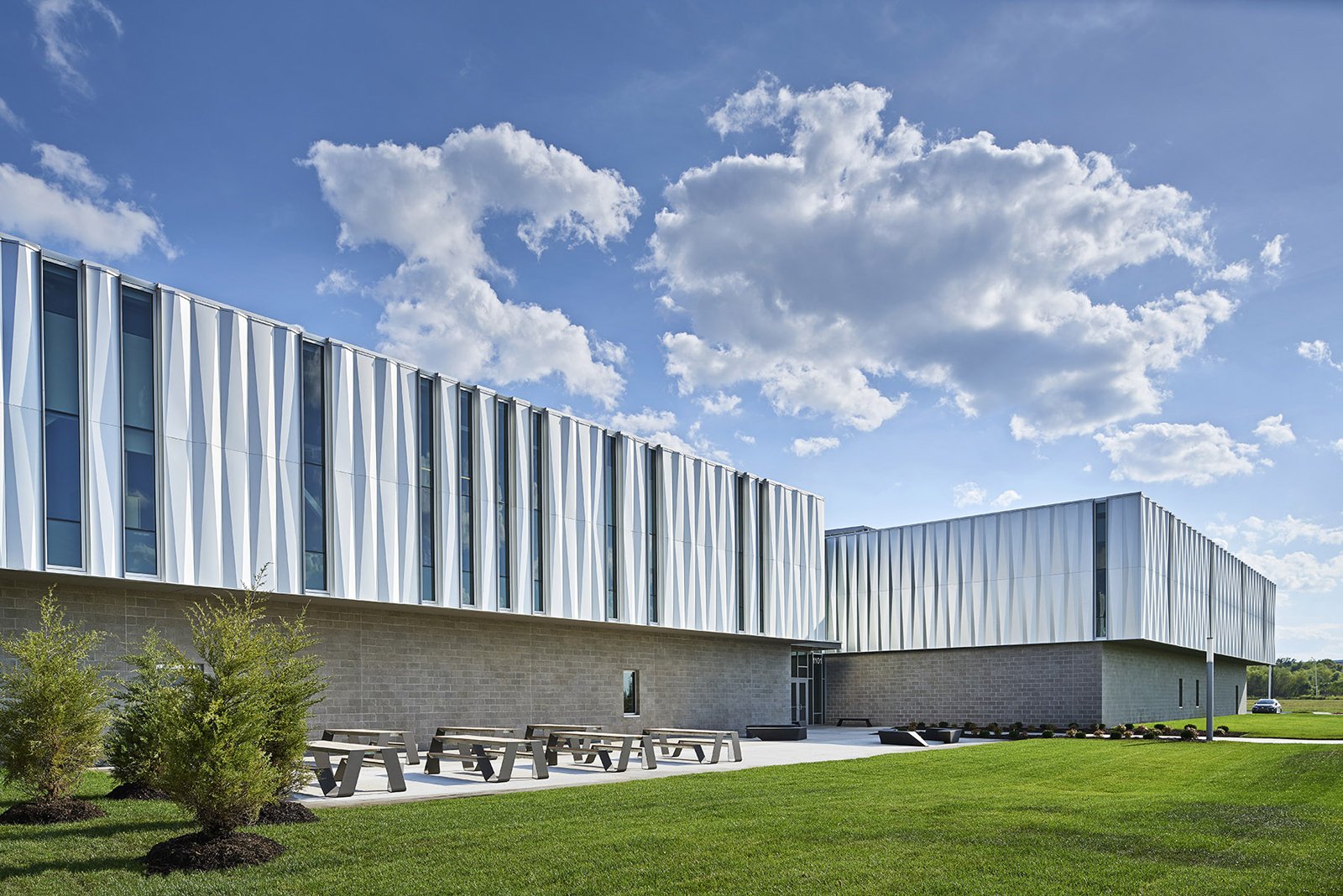 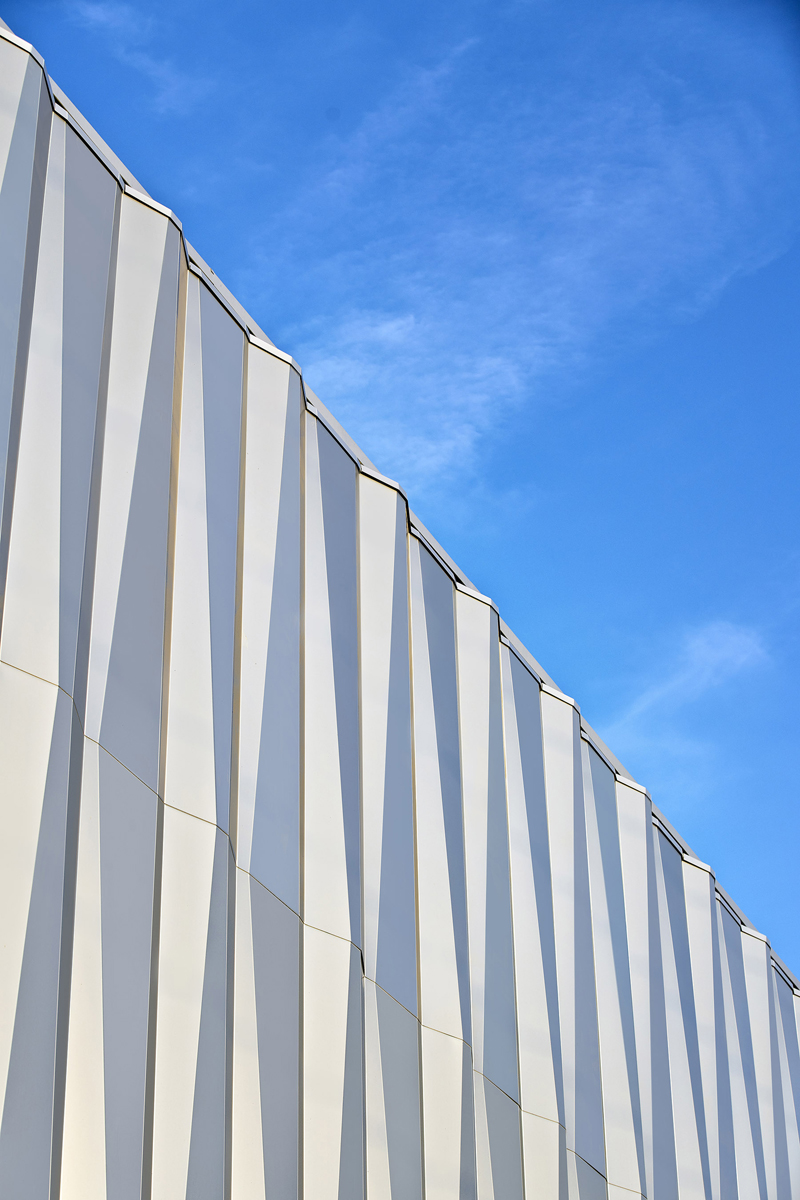 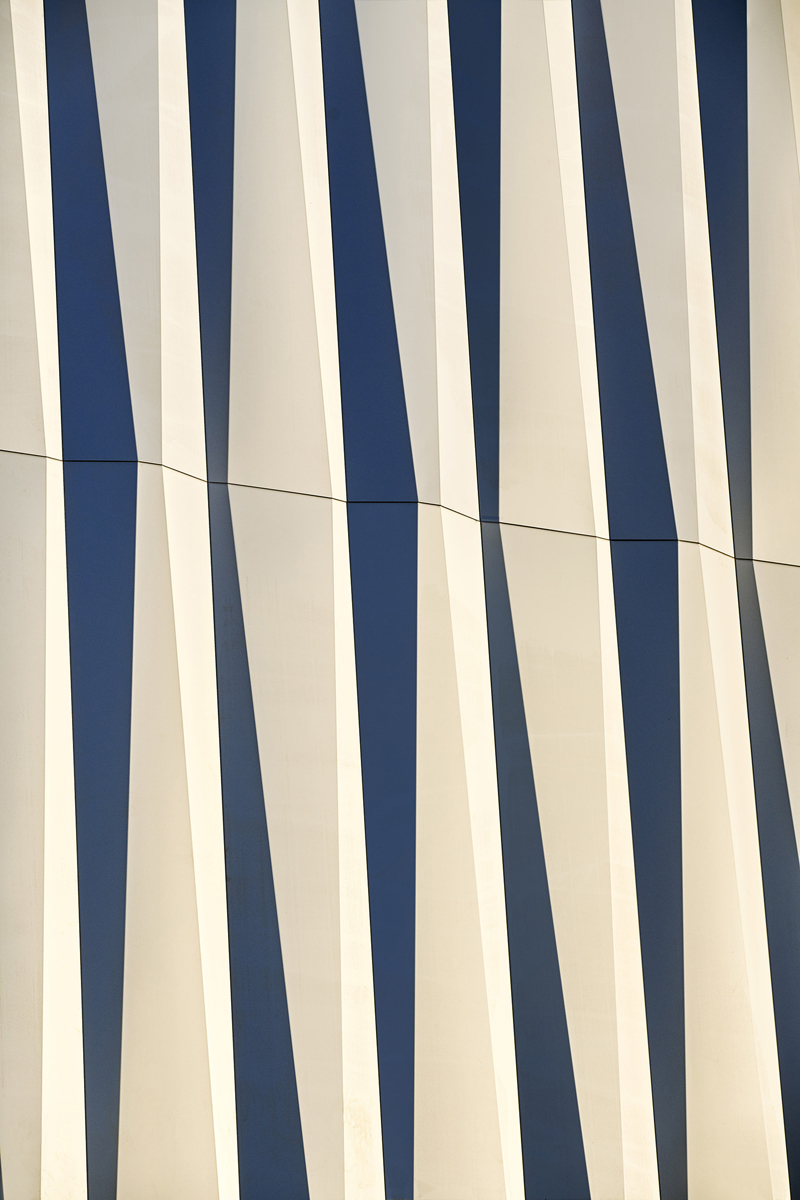 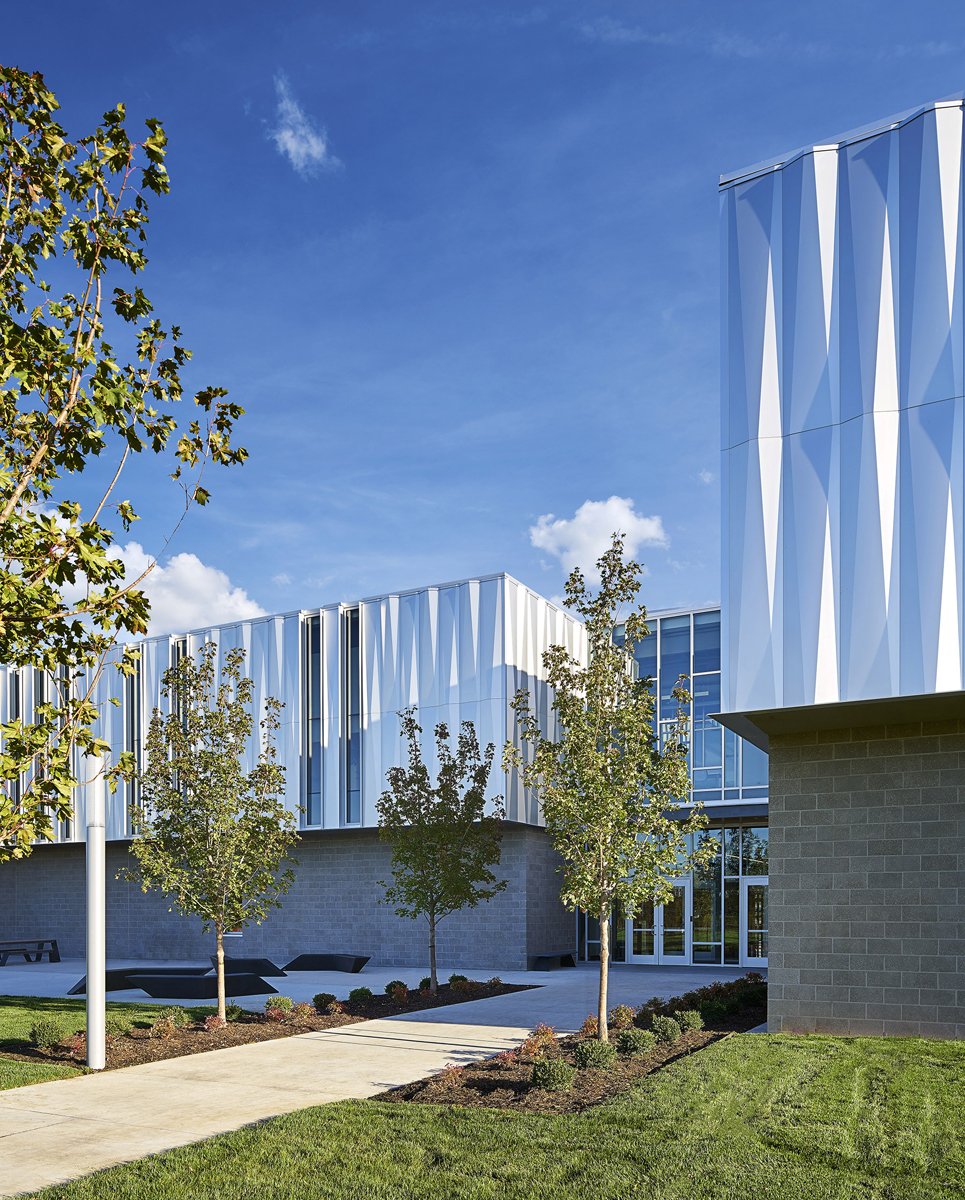 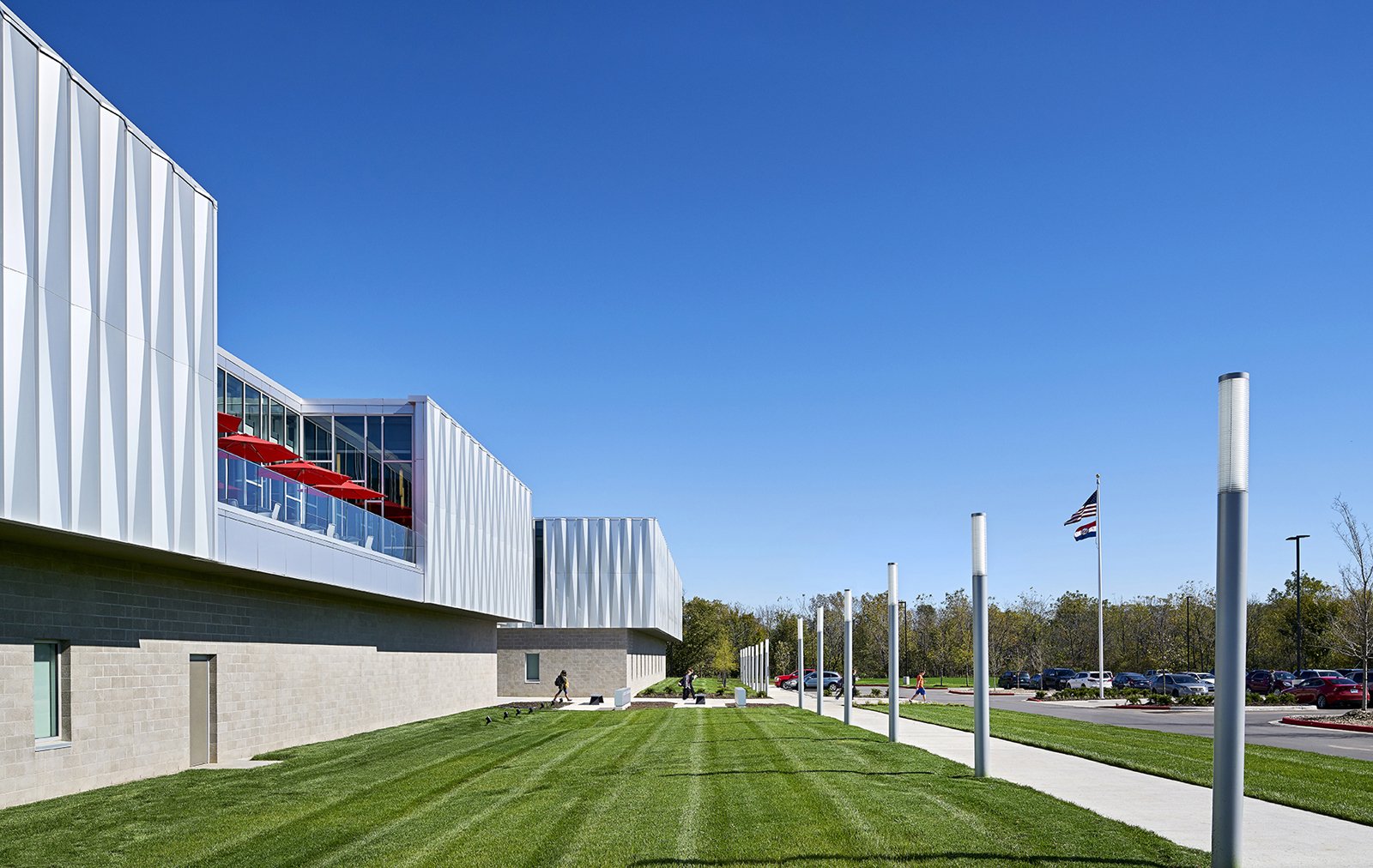 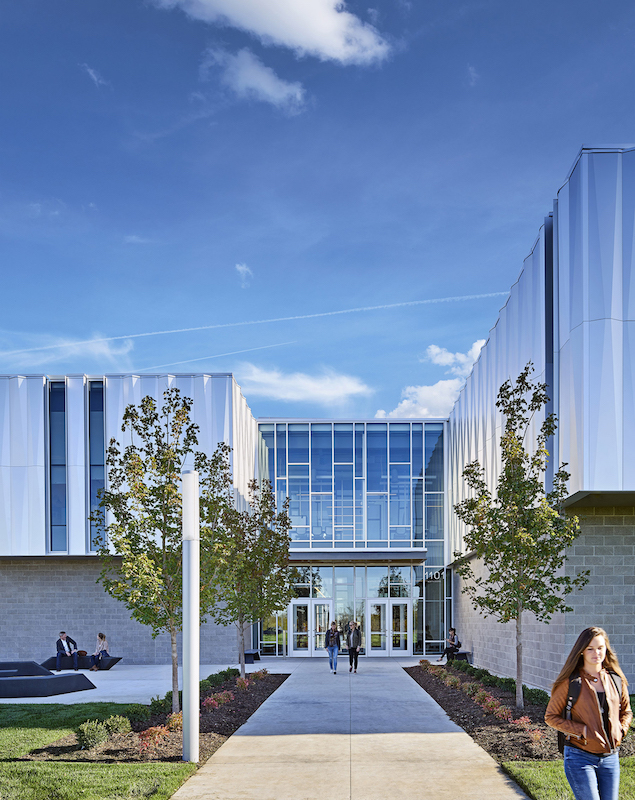 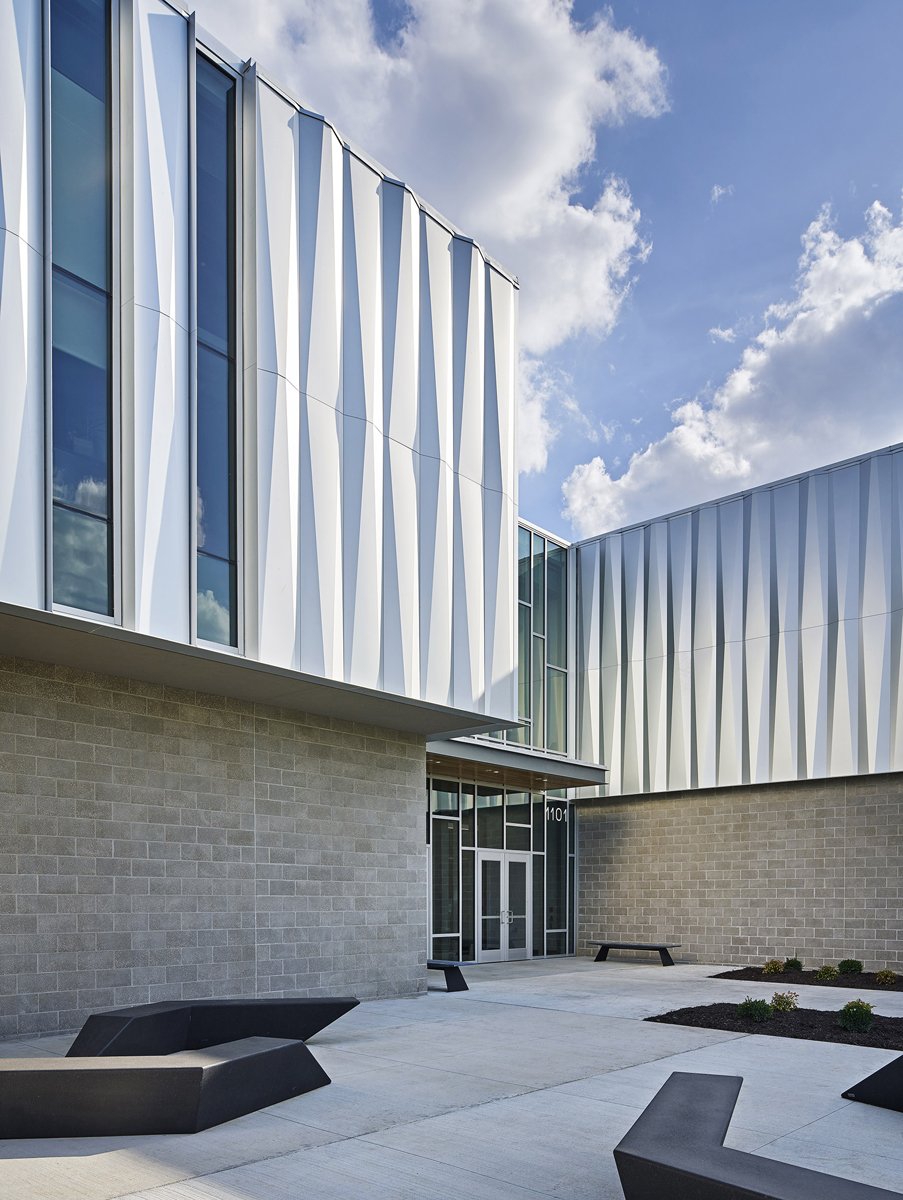 The Summit Technology Academy of the Missouri Innovation Campus, designed by Gould Evans, is a new education facility focused on bridging the gap between the workplace and the classroom. The building houses an innovative educational program developed by the University of Central Missouri, the local Lee’s Summit School District, and area industry participants. The collaborative nature of the program inspired the design team when planning the building’s facade.

There are three primary systems on the facade. The majority of the building is clad with a custom-fabricated metal panel rainscreen across the second and third levels and a curtain wall glazing system between the metal panels. The first level is clad with burnished concrete masonry units and punched windows. In an interview, Sean Zaudke, associate principal at Gould Evans and member of the design team, told AN, “We wanted the facade system to be something that was innovative and simple; something that was very specific to the project.”

The metal panel facade was fabricated from standard anodized aluminum coil stock, which was bent diagonally at two locations on each panel. There was only one panel type, which was rotated and mirrored across the building envelope to create a rippling effect that responds to light in different ways. Each panel is ten feet long and two feet wide with a return at the edge so they lock into each other. The dimensions of the aluminum coil stock govern the height of the skin, so the metal facade is twenty-feet in elevation. The metal is a rain-screen system attached to a continuous insulation barrier with a horizontal girt system.

At the very beginning of the project, Gould Evans was working with Standard Sheet Metal on the design of the panels. The team started with a series of paper mockup iterations to test different strategies to discover the most efficient panel design. The biggest challenge was maintaining a rectilinear edge while introducing two angular bends. After arriving at a solution, the project team worked with the metal fabricators to optimize the design.

At the point where the facade meets the sky, the metal panels are met with custom bent closure panels. These close the building envelope at the back while maintaining its undulating profile. A simpler flat closure panel meets the bottom of the rain-screen system. Additionally, simple metal returns negotiate the joint between the complexity of the bent edge and the straightness of the glass curtain wall.

Gould Evans designed the interior to be a flexible, adaptable space so that walls can move to respond to programmatic changes. The design of the curtain wall is adaptable in much the same way. Every piece of the curtain wall integrated into the rainscreen system is the same two-panel module and can be added, removed, or relocated. The system can be adapted as the needs of the educational program evolve.